The Northrop Grumman Cygnus cargo spacecraft was berthed to the International Space Station's Earth-facing port of the Unity module at 7:16 a.m. EST Monday morning and subsequently bolted into place. Cygnus will remain at the space station until May, when the spacecraft will depart the station. Following departure, the Cygnus will dispose of several tons of trash during a fiery reentry into Eart

The Northrop Grumman Cygnus cargo spacecraft was berthed to the International Space Station's Earth-facing port of the Unity module at 7:16 a.m. EST Monday morning and subsequently bolted into place. Cygnus will remain at the space station until May, when the spacecraft will depart the station. Following departure, the Cygnus will dispose of several tons of trash during a fiery reentry into Earth's atmosphere.

The spacecraft, which launched at 12:36 p.m. EST Saturday, Feb. 20, on an Antares rocket from NASA's Wallops Flight Facility in Virginia, brings approximately 8,000 pounds of research, hardware, and supplies to the orbiting laboratory to support the Expedition 64 and 65 crews. The Cygnus was captured earlier Monday morning at 4:38 a.m. EST.

Highlights of science investigations aboard this Cygnus include:

A new vision
Millions of people on Earth suffer from retinal degenerative diseases. These conditions have no cure, although treatments can slow their progression. Artificial retinas or retinal implants may provide a way to restore meaningful vision for those affected. In 2018, startup LambdaVision sent their first experiment to the space station to determine whether the process used to create artificial retinal implants by forming a thin film one layer at a time may work better in microgravity.

A second experiment by LambdaVision launching on NG CRS-15, Protein-Based Artificial Retina Manufacturing, builds on the first project, evaluating a manufacturing system that uses a light-activated protein to replace the function of damaged cells in the eye. This information may help LambdaVision uncover whether microgravity optimizes production of these retinas, and could assist people back on Earth.

Bringing advanced computing aboard the space station
Due to a need to prioritize reliability over performance, computing capabilities in space are reduced compared to capabilities on the ground, creating challenges when transmitting data to and from space.

Although relying on ground-based computers is possible for exploration on the Moon or in low-Earth orbit, this solution will not work for exploration farther into the solar system. Launched in 2017, the SpaceborneComputer study ran a high-performance commercial off-the-shelf computer system in space with the goal of having the system operate seamlessly for one year. It successfully performed more than 1 trillion calculations (or one teraflop) per second for 207 days without requiring reset.

Spaceborne Computer-2 builds on the successes of this first study, exploring how off-the-shelf computer systems can advance exploration by processing data significantly faster in space with edge computing and artificial intelligence (AI) capabilities. This experiment plans to demonstrate that Earth-based data processing of current station science data can instead be performed on station. Eliminating the need for researchers to send all raw data back to Earth for analysis could speed scientists' time-to-insight from months to minutes.

Space worms to the rescue
Tiny worms could help us determine the cause of muscle weakening that astronauts can experience in microgravity. Astronauts work out more than two hours a day aboard the space station to prevent bone and muscle loss caused by living in a microgravity environment during long-duration missions.

Thanks to a new device for measuring the muscle strength of tiny C. elegans worms, researchers with the Micro-16 study can test whether decreased expression of muscle proteins is associated with this decreased strength. The device consists of a small microscope slide filled with little rubber pillars. The strength of the worms is measured by how much force the worms apply to the pillars as they move around the slide.

Preparing for the Moon
The International Space Station serves as a testing ground for technologies we plan to use on future Artemis missions to the Moon. The NASA A-HoSS investigation puts to the test tools planned for use on the crewed Artemis II mission that will orbit the Moon. Built as the primary radiation detection system for the Orion spacecraft, the Hybrid Electronic Radiation Assessor (HERA) was modified for operation on the space station.

Verifying that HERA can operate without error for 30 days validates the system for crewed Artemis mission operations. A related investigation, ISS HERA, flew in 2019 aboard the space station. ISS HERA provided data and operational feedback in preparation for the Orion spacecraft's uncrewed Artemis I mission that will launch in 2021. 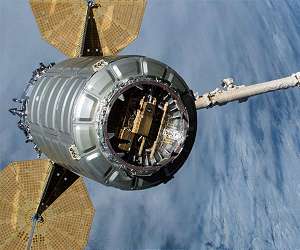 Several tech payloads from ISS National Lab on Northrop Grumman CRS-15
KSC FL (SPX) Feb 18, 2021
On Saturday, February 20, no earlier than 12:36 p.m. EST, Northrop Grumman is scheduled to launch its Cygnus spacecraft on an Antares rocket to the International Space Station (ISS), marking its 15th mission under NASA's Commercial Resupply Services (CRS) program. The launch, which will take place from NASA's Wallops Flight Facility in Virginia, will deliver thousands of pounds of critical supplies and research to the space station. Moreover, many of the payloads on this mission showcase the diver ... read more