Chinese astronauts have started receiving intensive training for spaceflights tasked with building the nation's space station, the China Manned Space Agency said on Tuesday. Several astronauts have spent the past year in hard training and are now in the prelaunch training phase, focusing on extravehicular activities and some other operations, it said in a news release. The agency sai

Several astronauts have spent the past year in hard training and are now in the prelaunch training phase, focusing on extravehicular activities and some other operations, it said in a news release.

The agency said its scientists, engineers, technicians and workers have also been busy preparing for the missions. It did not give more details, such as the roles of those taking part in the training sessions.

This year and next, 11 Long March 5B, Long March 7 and Long March 2F missions will put major components of the Chinese space station into orbit and shuttle astronauts there to assemble the facility.

The multimodule station, named Tiangong, or Heavenly Palace, will be mainly composed of three components-a core module attached to two space laboratories-with a combined weight of more than 90 metric tons.

The space station is expected to become fully operational next year and is set to operate for about 15 years, program planners have said.

The program is China's most sophisticated space endeavor.

In the coming months, the station's core module will be lifted into space by a Long March 5B rocket launched from the Wenchang Space Launch Center in Hainan province.

The module, named Tianhe, or Harmony of Heavens, will have three parts-a connecting section, a life-support and control section and a resources section. It will be equipped with three docking hatches reserved for visiting manned or cargo spacecraft, and two berthing locations used to connect with space laboratories. There will also be a hatch for astronauts' extravehicular activities.

The module will be 16.6 meters long and have a diameter of 4.2 meters. It will be central to the space station's operations, given that astronauts will live there and control the entire station from inside. The module will also be capable of hosting scientific experiments.

After the core module is launched, astronauts on the Shenzhou XII and XIII missions and two cargo ships will be launched within a few months to prepare the module for docking with other parts of the station.

Tiangong's two space labs will then be launched in separate Long March 5B missions and two more manned missions and two robotic cargo flights will be made to continue construction of the station.

In October, the China Manned Space Agency announced that the third batch of Chinese astronauts had been selected for the space station program.

Before them, China had 21 astronauts, with 11 taking part in six spaceflight missions. 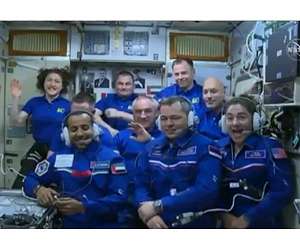 NASA fears gap in astronaut crew at multibillion-dollar space station
Orlando FL (UPI) Feb 17, 2021
Having spent well over $150 billion on the International Space Station, NASA fears a potential lack of launch vehicles could leave the orbiting platform without a U.S. astronaut and create a potential safety risk. Such a gap would occur only if a crew had a problem that forced them to leave the space station early, but it would represent a costly "lost opportunity that cannot be regained" for maintenance work and science, NASA spokesman Josh Finch said in an email. "NASA's position is that a ... read more