A new method to search for potentially habitable planets

Imaging planets orbiting around nearby stars, which could potentially harbour life, has become a possibility thanks to the progress made in observational methods by an international team of astronomers. First candidate: Alpha Centauri, a system similar to ours, "only" 4.3 light years away. This study is the subject of a publication in the journal Nature Communications. Efforts to obtain di

Imaging planets orbiting around nearby stars, which could potentially harbour life, has become a possibility thanks to the progress made in observational methods by an international team of astronomers. First candidate: Alpha Centauri, a system similar to ours, "only" 4.3 light years away. This study is the subject of a publication in the journal Nature Communications.

Efforts to obtain direct images of exoplanets - planets outside our solar system - have so far been hampered by technological limitations, which have led to a bias towards detecting planets much larger than Jupiter, around very young stars and far from the habitable zone, the area in which a planet may have liquid water on its surface, and thus potentially life.

"The Earth itself illuminates us at the wavelengths used for detection, and the infrared emissions from the sky, the camera and the telescope itself tend to drown out the signals we want to detect," says Kevin Wagner, NASA Hubble/Sagan post-doctoral fellow at the University of Arizona's Steward Observatory and first author of the paper. But the good reason to focus on these wavelengths is that this is where an Earth-like planet, in the habitable zone around a sun-like star, will shine the brightest. "

In other words, if astronomers want to find planets whose conditions are suitable for life as we know it, they must look for rocky planets the size of the Earth, within the habitable zones around older stars, similar to our Sun. And to do this, they have developed a new system for imaging exoplanets in the mid-infrared in combination with a very long observation time.

This system, which was able to achieve unprecedented sensitivity by using a deformable secondary mirror to correct for the distortion of light induced by the Earth's atmosphere, used a coronagraph developed - thanks to an ERC grant - by researchers at ULiege. A starlight-blocking device which they optimised for the mid-infrared spectrum of light in order to block the light from one star at a time.

"We achieved the capability to directly image planets about three times the size of the Earth in the habitable zone of alpha Centauri," explains Olivier Absil, FNRS Research Associate and director of the PSILab (STAR Research Institute/Faculty of Sciences) at ULiege. Combined with efficient subtraction of thermal background noise, this method represents an improvement by a factor of 10 compared to existing capabilities for direct observation of exoplanets".

Similar in effect to noise-canceling headphones, which allow soft music to be heard over a steady stream of unwanted jet engine noise, the technique allowed the team to remove as much of the unwanted noise as possible and detect the much fainter signals created by potential planet candidates inside the habitable zone.

By moving one star on the coronagraph and one star off the coronagraph every tenth of a second, this technique has allowed researchers to observe each star for half the time, and more importantly it has allowed them to subtract one image from the next, which removes all but the noise of the camera and telescope.

After removing the known artefacts created by the instrumentation and the residual light from the coronagraph, the final image revealed a light source designated as "C1", a plausible detection, which could be a planet the size of Neptune to Saturn, located at a distance from Alpha Centauri A similar to that between the Earth and the Sun, i.e. within the habitable zone. "At this stage however, without verification via a second observing campaign, we cannot exclude an instrumental artefact of unknown origin, or even the signature of an asymmetrical dust cloud," says Olivier Absil.

Another direct imaging campaign will be attempted in the coming years, and other methods (e.g. radial velocity measurements) could also provide an answer. In any case, these results demonstrate the potential of high-contrast imaging in the mid-infrared to enable the observation of Earth-like planets around nearby stars.

"By 2028, the same type of coronagraph will equip the METIS instrument installed on the future ELT (Extremely Large Telescope), which will make it possible to image planets as small as the Earth in the habitable zone of alpha Centauri, and of a handful of other nearby stars," concludes Olivier Absil. The coronographs developed at the University of Liege are the result of more than 10 years of technological development, in partnership with the University of Uppsala, with funding from the European Research Council .

Finding a potentially habitable planet within Apha Centauri has been the goal of the initiative Breakthrough Watch/NEAR, which stands for New Earths in the Alpha Centauri Region, and involves researchers from the University of Liege. Breakthrough Watch is a global astronomical program looking for Earth-like planets around nearby stars. During the observation campaign, about 7 terabytes of data were collected. Data that the researchers made available to the public 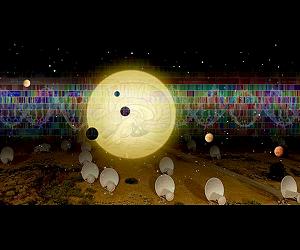