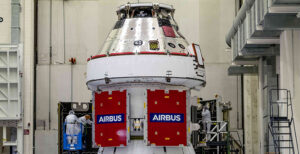 The European Service Module (EMS) is the 15,000-kilogram powerplant of NASA’s Orion spacecraft.

In addition to propulsion, it provides consumables like oxygen and water, thermal control and electrical power. The production of service modules for the Orion crew spacecraft is part of ESA’s long-term involvement in Artemis, NASA’s push to return humankind to the surface of the moon.

The finalization of the €650 million contract to produce ESM-4 through 6 was announced on Feb. 2 as part of a joint ESA and Airbus briefing. The firm, fixed-price contract brings the total number of ESMs to be built by Airbus to six.

The first ESM to roll off the production line at Airbus’ facility in Bremen, Germany was delivered to NASA’s Kennedy Space Center in November 2018. It is currently undergoing final integration with the Lockheed-Martin-built Orion spacecraft for Artemis 1, an uncrewed test flight slated to be launched later this year to certify the spacecraft and the Space Launch System (SLS) rocket as safe for human spaceflight.

EMS-2, which will be used for Artemis 2, the program’s first crewed mission, is currently in the final stages of production with delivery expected later this year. EMS- 3, which will be used for the Artemis 3 mission that aims to deliver astronauts to the lunar surface for the first time in over 50 years, is in the early stages of integration in Bremen with delivery expected in October 2022.

The three additional Orion service modules are earmarked to be used for Artemis 4 through 6. Two of the three missions will be in support of the construction of the lunar Gateway, a planned space station in orbit around the moon intended to support crewed missions to the lunar surface.

In supplying the service modules for NASA’s Orion spacecraft, ESA continues its arrangement with the United States in exchanging hardware for access to the International Space Station and, in the future, Artemis missions. According to ESA director of human and robotic exploration David Parker, Europe has already secured three seats aboard Orion missions through its participation in Gateway.