A Steady DRIP with NASA Satellites

When drought hits the Horn of Africa, it's a threat to lives and livelihoods. Communities need access to water for sanitation, hydration, livestock and agriculture -?and in many cases, tapping groundwater supplies is the difference between a "drought" and a "drought emergency." But maintaining the thousands of groundwater pumps that supply fresh water to drought-prone areas in east Africa is a s

When drought hits the Horn of Africa, it's a threat to lives and livelihoods. Communities need access to water for sanitation, hydration, livestock and agriculture -?and in many cases, tapping groundwater supplies is the difference between a "drought" and a "drought emergency." But maintaining the thousands of groundwater pumps that supply fresh water to drought-prone areas in east Africa is a significant challenge. NASA satellite data helps the people who maintain this crucial infrastructure by highlighting the places most at-risk for drought and informing early warning actions to prevent the worst drought impacts on local communities.

"By forecasting water demand, we can support water system operations to ensure that water access is secure during drought periods and costly emergencies are prevented," said Evan Thomas, former NASA engineer and associate professor and director of the Mortenson Center in Global Engineering at the University of Colorado, Boulder.

Thomas leads the Drought Resilience Impact Platform (DRIP), which monitors the water supplies of 3 million people via sensors installed on groundwater pumps across hundreds of sites in Kenya and Ethiopia. The sensors alert the DRIP network if a pump is failing or needs routine maintenance. DRIP was funded by several USAID programs, and partners include the Millennium Water Alliance (MWA), an international water security nonprofit organization.

As a member of the Applied Sciences team that supports SERVIR, a joint initiative of NASA and the U.S. Agency for International Development (USAID), Thomas and his team are incorporating NASA satellite data to identify potential drought conditions. DRIP partners then use that data to advise decision makers on where to take action - such as fixing a groundwater pump - before the situation becomes dire.

Kenya, Ethiopia and other East Africa countries have experienced increasing drought over the past decade, attributable in part to climate change. During these dry spells, when there's less rain, communities rely more on underground water stored naturally in the soil, sand and rock. The DRIP team has developed models for groundwater demand using NASA Earth observations like rainfall and surface water - including data from satellite missions that use gravity to measure changes in water amounts at Earth's surface.

One planned user of the DRIP system is the USAID and NASA-supported Famine Early Warning Systems Network (FEWS NET). FEWS NET works with scientists, government ministries and international agencies to track and identify potential food insecurity - and are hoping to use the DRIP platform to inform public reports on conditions in?the world's most food-insecure countries.

In Ethiopia, for example, FEWS NET may be able to incorporate DRIP's real-time data on the functionality of water pumps vital to local communities' ability to access groundwater. That means, in times of drought, FEWS NET could determine which areas are able to compensate for that scarcity of rainfall by tapping into groundwater supplies.

Over the next several years, in collaboration with Thomas and his team, FEWS NET plans to integrate the data collected through this project into food security forecasts for East Africa.

Getting DRIP's analysis into the hands of local water resource managers and others in Africa is one of the tasks of the Nairobi, Kenya-based Regional Centre for Mapping of Resources for Development (RCMRD) - which serves as the SERVIR hub for Eastern and Southern Africa - and the MWA. MWA brings together governments, private sector companies and aid organizations to increase safe drinking water access and sanitation capacity in communities in Africa, Asia and Latin America.

Thomas's team is collaborating with both MWA and RCMRD to use DRIP information to predict groundwater demand and work with national and local government agencies, such as the Kenya National Drought Management Authority, to use the data to help prevent drought emergencies.

"As a regional service provider, RCMRD leverages partnerships that help us serve our communities with the best information for decisions that affect their daily activities," said Denis Macharia, weather and climate lead for RCMRD. "DRIP is a very useful tool for us."

Macharia is the co-principal investigator of this project with Thomas, as well as a PhD student at the University of Colorado Boulder, working together to incorporate NASA satellite data in DRIP. In the arid regions of Kenya and Ethiopia, an area notorious for cyclic and devastating droughts, Macharia says DRIP will be a "super tool" because it combines satellite data and ground measurements to monitor water and grazing land to provide unprecedented insight into where water access might be needed most - before a drought strikes.

"These critical livelihood drivers are central to the resilience of pastoralist communities in these regions," Macharia said. "As DRIP develops, we are already having engagements with drought management and humanitarian agencies like the Kenya Red Cross Society, providing information from DRIP that can help inform early warning actions to mitigate drought impacts on these vulnerable communities."

Dan Irwin, SERVIR global program manager at NASA, said that "this work is highly innovative and a great example of how satellite data can have real world impact to help with people's lives and livelihoods in places like East Africa. Our vision is to connect the vantage point of space to life at ground level, and DRIP is doing just that."

In 2021 the DRIP team hopes to further broaden this advanced water access monitoring across the arid regions of Ethiopia and Kenya, Thomas said, adding that they'll be expanding even to sites that don't have on-the-ground sensors. "As climate change increases water stress on people, agriculture and livestock, we hope to help end drought emergencies by ensuring that local, national and international stakeholders can help make sure that water is available year-round." 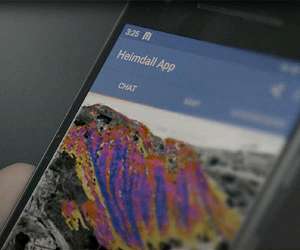 Digital platform helps rescue services during natural disasters
Oberpfaffenhofen, Germany (SPX) Feb 04, 2021
In the event of a forest fire, flash flooding or a landslide, how can firefighters and rescue workers get to the disaster site as quickly as possible? What measures need to be taken? What lessons can be learned from past disasters? The HEIMDALL project provides answers via a digital platform that collects all of this information. At the virtual final presentation of the project, the benefits that it can offer were demonstrated, for example in the event of a forest fire. The German Aerospace Center ... read more