An art lover dreams of space

It started with a movie. Supernovas filled the screen and exploded with galactic color. The voice of Neil DeGrasse Tyson narrated the beginning of the universe. At only 14 years old, Alana Sanchez was hooked. Prior to high school, Sanchez was primarily interested in visual arts and movies. She taught herself animation and aspired to work in the creative realm. However, her dreams quickly t

It started with a movie. Supernovas filled the screen and exploded with galactic color. The voice of Neil DeGrasse Tyson narrated the beginning of the universe. At only 14 years old, Alana Sanchez was hooked.

Prior to high school, Sanchez was primarily interested in visual arts and movies. She taught herself animation and aspired to work in the creative realm. However, her dreams quickly transformed after watching the popular science documentary, "Cosmos: A Spacetime Odyssey." Today, Sanchez is an MIT senior majoring in physics with a focus on astronomy. "After watching 'Cosmos,' I fell in love with space. I got really into STEM after that," says Sanchez.

Her fascination with space increased as she took on her Florida high school's AP Physics curriculum. While she occasionally struggled as the only female student and student of color in her class, Sanchez says her passion helped her through the course. "I wasn't the best student in my physics class, but I was the most interested one," she says.

Sanchez transitioned to MIT by first attending Interphase EDGE, an enrichment program for newly admitted students. She credits the program for helping her meet other students from underrepresented groups, as well as her closest friends. Sanchez also has been a resident of McCormick Hall, the only all-female dormitory on campus, since her first year. "McCormick is a major hub for meeting people from all types of different backgrounds. Getting involved with the community has been one of the highlights of my MIT experience," she says.

While Interphase and McCormick helped her find her first friends at MIT, Sanchez remembers her first classes as being particularly difficult. The heightened challenges of physics class began to push her away from the topic. She often experienced self-doubt about her skills. Eventually, she decided to take 8.282 (Introduction to Astronomy) with Professor Anna Frebel, who was Sanchez's first female professor at MIT. The class reinvigorated Sanchez. Frebel began the course by presenting pictures of herself alongside telescopes around the world, reminding Sanchez what she, too, was capable of accomplishing.

"In the end, it was my motivation that got me through the beginning, rather than innate talent," says Sanchez. "I saw my professor's work and knew that that's what I wanted to do. I decided I just had to stay motivated and keep going."

She has this message to other MIT students who may be facing similar moments of imposter syndrome: "You're struggling against the smartest kids you've ever known. You're not alone, and a grade is not a reflection of who you are or your abilities."

Sanchez also credits doing research for giving her more confidence as a student. Her first project was with the MIT Kavli Institute for Astrophysics and Space Research, and focused on identifying exoplanets - planets outside of our solar system. "Exoplanets can be identified when they move in front of a red dwarf, since there's a shift in light output," Sanchez explains. "The data can then be used to help researchers catalog characteristics about exoplanets, some of which might be habitable."

While Sanchez found the research interesting, she knew that any exoplanet she discovered would be unapproachable in a human lifetime. She decided she wanted to pivot toward working on research with a more immediate impact.

Her desire was fulfilled with another project she pursued the summer before her junior year. Drawing upon her early interests in visual arts and space, Sanchez finally found a subject to make her two worlds unite. The project, led by Professor Michael Person, the head of the MIT Wallace Astrophysical Observatory, focused heavily on fieldwork. Sanchez and the group often traveled together to Waltham, Massachusetts, to use the local telescope and take pictures of the night sky. "Most of what we know about stars comes from light recordings and images," she adds.

For one notable event, Sanchez's team collaborated with 10 other observatories to track the transit of Titan, one of Saturn's moons, as it moved in front of a local star. With these images, the team predicted when and where this transit would be witnessed again. NASA then used the team's projected coordinates to fly their telescope to the next observation site. "It was amazing to see the tangible effect our data could make. It was more along the lines of research I could see myself doing into the future," she says.

Today, Sanchez works with the Space Enabled research group in the MIT Media Lab. The group focuses on designing accessible space systems that advance the United Nations Sustainable Development Goals. Sanchez's own work combines her technical and visualization expertise to create a sustainable rocket fuel source out of beeswax. The mission is to incentivize the deorbiting of retired satellites, since many are left as dangerous waste in our atmosphere. Her lab's fuel will be tested on the upcoming Blue Origin flight and on the International Space Station this year.

"Our group was theorizing how to use materials that may already be present in satellites to help them deorbit, such as the wax in the unit's insulation," explains Sanchez. "By turning the leftover wax into a fuel source, it could mitigate costs and make deorbiting more efficient."

Sanchez also continues to incorporate imaging into her research. "To turn the wax into a fuel source, we heat and spin it until it slowly solidifies and forms a fuel grain. We can track the solidification process based on videos that I take with a GoPro camera," she says, enthusiastically.

When she isn't doing research, Sanchez pursues her interest in art as a public programming assistant in the MIT Program in Art, Culture, and Technology. Her help behind the scenes, from website to installation management, allows visual artists to share their work with the MIT community. The best part of the job, she adds, is getting to witness these presentations, which have included a variety of movie screenings, performance art, and visual displays.

Sanchez is currently applying for PhD programs in aerospace engineering. Sustainability in space continues to be her key focus, inspired by her work with Space Enabled. While most of her chosen programs are focused on real-world applications for space travel, Sanchez still admits to being fueled by her childhood curiosity in what lies beyond our atmosphere.

"I think the biggest thing that drew me to space research is trying to understand the universe. Why is it that this planet can sustain life, while others are barren wastelands?" she ponders. "While we can appreciate Earth, most of us will never be able to experience space in our lifetime."


Related Links
MIT Kavli Institute for Astrophysics and Space Research
Stellar Chemistry, The Universe And All Within It 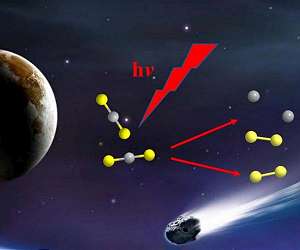 Dalian coherent light source reveals the origin of interstellar medium S2 fragments
Dalian, China (SPX) Jan 29, 2021
Studying the creation and evolution of sulfur-containing compounds in outer space is essential for understanding interstellar chemistry. CS2 is believed to be the most important molecule in comet nuclei, interstellar dust, or ice cores. CS and S2 are the photodissociation fragments of CS2. Forty years ago, the emission spectra of only CS and S2 species, and not those of CS2 species, were observed from several comets by the International Ultraviolet Explorer satellite. The photodissociation mechani ... read more