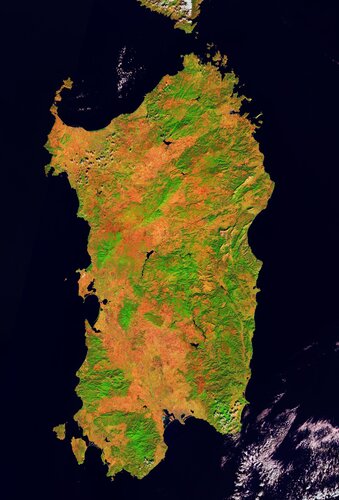 Image: Sardinia, the second-largest island in the Mediterranean Sea, is featured in this false-colour image captured by the Copernicus Sentinel-2 mission.

Sardinia, the second-largest island in the Mediterranean Sea, is featured in this false-colour image captured by the Copernicus Sentinel-2 mission.

Zoom in to see this image at its full 20 m resolution or click on the circles to learn more about the features in this image.

Sardinia (also known as Sardegna) is situated between the Mediterranean Sea to the west and south and the Tyrrhenian Sea to the east. The island sits 200 km west of the Italian Peninsula, 200 km north of Tunisia and around 12 km south of the French island of Corsica, partially visible in the top of the image.

This image, which uses data from 11 October to 14 October 2019, has been processed using the shortwave infrared band and the near infrared band to highlight dense vegetation. Crops and vegetation appear in bright green in the image, while bare soil can be seen in various shades of orange and brown.

Grasslands and croplands with a higher moisture content appear more vibrant in the image. As water is a strong absorber of infrared, inland water bodies are delineated and can be easily spotted in black. Much of the Sardinia’s arable land is devoted to cereal cultivation and fruit growing.

Sardinia is a mainly mountainous region, with its highest point Mount La Marmora in the Gennargentu massif visible in the centre-right of the image. With over 1800 km of coastline, Sardinia is internally renowned for its beaches including those along the Emerald Coast, or Costa Smeralda, Alghero and Villasimius. The coasts, particularly in the east, are high and rocky, with long stretches of coastline with bays, inlets and various smaller islands located off the coast.

The archipelago of La Maddalena, including the renowned islands of La Maddalena, Caprera and Santo Stefano, can be seen in the top-right of the image. Its islands are known for their pristine beaches and wild beauty. Cagliari, the island’s capital and largest city, lies on the southern coast of the island.

Copernicus Sentinel-2 is designed to provide images that can be used to distinguish between different crop types as well as data on numerous plant indices, such as leaf area index, leaf chlorophyll content and leaf water content – all of which are essential to accurately monitor plant growth.

This image is also featured on the Earth from Space video programme.