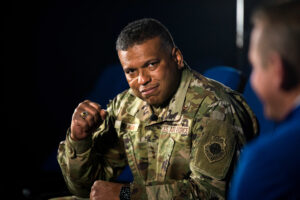 WASHINGTON — As many as 116 graduates of the U.S. Air Force Academy this year will join the U.S. Space Force. That is an increase from last year when 86 graduates went to the space service.

Cadets at the academy can choose to serve in the Air Force or the Space Force after they graduate. Speaking on a Mitchell Institute webcast, Clark said he estimates 116 cadets from a graduating class of about 1,000 this year will go to the Space Force. That number is set based on how many officers the Space Force needs.

Clark said there are more volunteers for Space Force duty “than we have slots to give.”

The school has expanded the space curriculum to support the new branch of the military. A key requirement to be eligible to join the Space Force is to have a technical degree, said Clark. “We’re getting direction from [Chief of Space Operations] General Raymond on what they want to see in a cadet. He wants every guardian to be fluent in one language: digital.”

Cadets in the space program learn how to build and operate satellites. They also have courses in space law, strategy and operations.

Clark said the academy wants to increase space-focused education for cadets even if they end up serving in the Air Force.

He said the academy is proud that 42 NASA astronauts are among its graduates.

One of the astronauts recently selected for NASA’s first Artemis mission to the moon is Raja Chari who graduated from the Air Force Academy in 1999 and could end up being the first academy grad to walk on the moon.