Analyzing different solid states of water on other planets and moons

Just like on Earth, water on other planets, satellites, and even comets comes in a variety of forms depending on multiple factors such as pressure and temperature. Aside from the gaseous, liquid, and solid states we are accustomed to, water can form a different type of crystalline solid called clathrate hydrate. Although they look similar to ice, clathrate hydrates have actually small wate

Just like on Earth, water on other planets, satellites, and even comets comes in a variety of forms depending on multiple factors such as pressure and temperature. Aside from the gaseous, liquid, and solid states we are accustomed to, water can form a different type of crystalline solid called clathrate hydrate.

Clathrate hydrates play a crucial role in the evolution of a planet or satellite's atmosphere; volatile gases such as methane are stored in these crystals and released slowly over geological timescales. Because of the enormous amounts of time required for clathrate hydrates to form and dissociate at cryogenic temperatures, it has proven very difficult to conduct experiments on Earth to predict their presence in other celestial bodies.

In a recent study published in The Planetary Science Journal, a team of scientists tackled this issue with a combination of both theory and experimental data.

Lead scientist, Professor Hideki Tanaka from Okayama University, Japan, explains: "For many years, we have been developing rigorous statistical mechanics theory to estimate and predict the behavior of clathrate hydrates. In this particular study, we focused on extending this theory to the cryogenic temperature range--down to the 0 K limit."

A notable challenge was theoretically establishing the conditions for the formation and dissociation of clathrate hydrates under thermodynamic equilibrium at extremely low temperatures.

This was necessary to use the renowned model of water/hydrate/guest coexistence in clathrate hydrates proposed by van der Waals and Platteeuw in 1959. Tanaka, Yagasaki, and Matsumoto revised this theory to fit the cryogenic conditions that would be found outside Earth and corroborated its validity based on thermodynamic data gathered by space probes.

Then, the scientists used this new theory to analyze the states of water on Saturn's moon Titan, Jupiter's moons Europa and Ganymede, and Pluto. According to their model, there is a remarkable contrast in the stable forms of water found on these celestial bodies. Whereas Europa and Ganymede contain only regular ice in contact with the thin atmosphere, all the water on the surface of Titan, and possibly Pluto, is in the form of clathrate hydrates.

"It is remarkable," says Tanaka, "that one specific state of water appears exclusively in different satellite and planetary surfaces depending on temperature and pressure. In particular, the water in Titan seems to be completely in the form of methane-containing clathrate hydrates all the way up to the surface from the top of its subsurface ocean."

The extension of available theory on clathrate hydrates to cryogenic temperatures will let researchers corroborate and revise current interpretations on stable water forms in outer space and on celestial bodies. This information will be essential to understand the evolution of planetary atmospheres, unlocking another piece of the puzzle in our quest to understand the evolution of our planet and the rest of the universe. 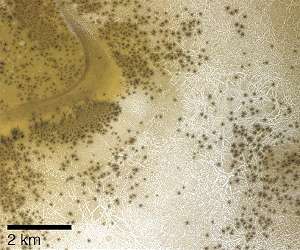 Frosty scenes in martian summer
Paris (ESA) Jan 11, 2021
The CaSSIS camera onboard the ExoMars Trace Gas Orbiter captured remnant frost deposits in a region near Sisyphi Tholus, in the high southern latitudes of Mars (74S/246E). This image was taken during the early morning of a midsummer day in the southern hemisphere. At these high latitudes, carbon dioxide ice and frost develop. Frost can be seen within polygonal cracks in the terrain, a feature that indicates the presence of water ice embedded in the soil. The black spots observed throug ... read more