Russia's cosmonaut training centre said Tuesday it has begun vaccinating employees against the coronavirus ahead of future space missions. The press service of the Yuri Gagarin Training Centre told AFP that around 40 of its nearly 1,500 employees had received the first dose of Russia's homemade coronavirus vaccine Sputnik V. Named after famous Soviet cosmonaut Yuri Gagarin, the first pe

Russia's cosmonaut training centre said Tuesday it has begun vaccinating employees against the coronavirus ahead of future space missions.

The press service of the Yuri Gagarin Training Centre told AFP that around 40 of its nearly 1,500 employees had received the first dose of Russia's homemade coronavirus vaccine Sputnik V.

Named after famous Soviet cosmonaut Yuri Gagarin, the first person to travel to outer space, the centre is located in Star City, a short drive from Moscow.

"Training continues and we are prioritising the vaccination of employees who are in close contact with crews preparing for mission," the centre's spokeswoman said.

The centre said that the main and backup crews of a new expedition to the International Space Station (ISS) had been vaccinated earlier and will receive their second dose on Friday.

Sputnik V has an efficacy of over 90 percent according to its developers. It is administered in two doses with an interval of three weeks.

By mid-December, Russia had vaccinated several cosmonauts ahead of future flights and some of them have already received both doses.

The next Russian crew to the ISS -- cosmonauts Oleg Novitsky, Pyotr Dubrov and Sergei Korsakov -- is due to depart from the Baikonur spaceport in Kazakhstan in April 2021.

Novitsky and Dubrov have received their first doses, the centre said on Tuesday, as quoted by TASS news agency.

The two Russian cosmonauts currently on the ISS -- Sergei Ryzhikov and Sergei Kud-Sverchkov -- had not been vaccinated before their take-off in late September.

At the time the Russian vaccine had just started its third phase of trials, and the cosmonauts indicated that they would wait for further testing.

Russia began mass vaccinations with Sputnik V in early December, while batches of the vaccine were sent overseas to Belarus, Serbia and Argentina.

According to the Russian Direct Investment Fund (RDIF), which financed the development of Sputnik, more than one million people have been vaccinated in Russia. 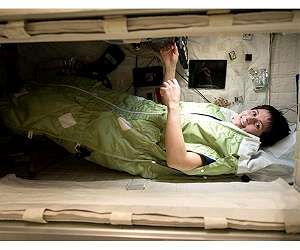 NASA studies fruit flies to understand astronaut sleep cycles
Orlando FL (UPI) Jan 01, 2021
Tiny fruit flies are helping NASA study how brain activity and sleep patterns change when organisms live in the microgravity of space. An experiment on the International Space Station will build on the United States' legacy of using fruit flies to understand how life endures in space. The experiment, known as Genes in Space-7, uses genetic matter derived from fruit fly brains to understand their circadian rhythm - or 24-hour sleep cycle. "Of course, it would be ideal to sample astronau ... read more