Prepping for a spacewalk to install Colka on ISS external hull

Prepping for a spacewalk typically means diving underwater to rehearse and fine-tune operations. In 2016, ESA astronaut Alexander Gerst performed such an underwater rehearsal for the Colka high speed radio, the brown box imaged above, that will be installed this month on the International Space Station. NASA astronauts Mike Hopkins and Victor Glover will integrate the small fridge-si

Prepping for a spacewalk typically means diving underwater to rehearse and fine-tune operations.

In 2016, ESA astronaut Alexander Gerst performed such an underwater rehearsal for the Colka high speed radio, the brown box imaged above, that will be installed this month on the International Space Station.

NASA astronauts Mike Hopkins and Victor Glover will integrate the small fridge-sized device outside the European Columbus module during a spacewalk scheduled this year. ESA astronaut Andreas Mogensen will be at NASA's mission control directing the spacewalkers as Capcom. The Columbus Ka-band terminal, nicknamed 'Colka', will enable faster communication with Europe.

Orbiting the planet every 90 minutes means the Space Station is constantly making and breaking short links with ground stations on Earth as it passes over them at a height of 400 km.

With Colka, a European telecommunications satellite in geostationary orbit can pick up data sent from the Columbus module. This satellite is part of the European Data Relay System and will be able to directly relay the signals from Columbus to European soil via a ground station in Harwell, in the UK.

The current data relay system routes via USA, which results in longer data transfer times. The Colka upgrade will ensure faster communications between Columbus and Europe, speeds of up to 50 Mbit/s for downlink and up to 2 Mbit/s for uplink. This will allow astronauts and researchers to benefit from a direct link with Europe at home broadband speeds - delivering a whole family's worth of video streaming and data for science and communications.

Colka will be installed just weeks after the announcement that Europe will start building a communications module in support of the Gateway, the next spaceship to be assembled and operated in the vicinity of the Moon by International Space Station partners. The ESPRIT High-speed Lunar Communication System will be launched on NASA's Gateway living quarters, in 2024.

As humankind ventures farther from Earth and goes forward to the Moon, a robust communications infrastructure is necessary for the lunar economy and to return knowledge and benefits to Earth. ESA is working on this with the Moonlight project, a system for lunar telecommunications and navigation to reduce design complexity, liberating missions to concentrate on their core activities.

ColKa was designed and built by British and Italian companies, using products from Belgium, Canada, France, Germany and Norway, some of which have been qualified under the ESA's programme of Advanced Research in Telecommunications Systems (ARTES). 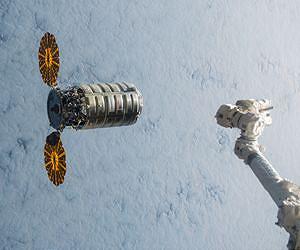 Northrop Grumman's NG-14 Cygnus Spacecraft completes primary mission to ISS
Dulles VA (SPX) Jan 07, 2021
Northrop Grumman reports that the company has completed the first phase of its 14th cargo resupply mission to the International Space Station under NASA's Commercial Resupply Mission (CRS-2) contract. Cygnus was released by the station's robotic arm at 10:11 a.m. ET, carrying more than 4,000 pounds of disposable cargo and will remain in orbit for approximately two weeks for the secondary phase of its mission. "For more than six years, Northrop Grumman has supported human spaceflight by delivering ... read more