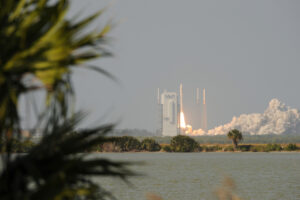 WASHINGTON — As many as 53 space missions are projected to lift off in 2021 from Florida’s Space Coast, the vice commander of the 45th Space Wing said Jan. 12.

“We have 53 launches in our forecast with one already on the books,” Col.

Brande Walton told the National Space Club of Florida during an online event.

The first space launch of the year was a SpaceX Falcon 9 launch of a Turkish communications satellite Jan. 7.

A total of 31 space launches were carried out in Florida in 2020, Walton said. The 2021 forecast is just a projection as launch schedules shift from month to month.

Walton said she expects three of the 2021 launches to be NASA human spaceflight missions — two by SpaceX and one by Boeing. SpaceX is expected to continue to launch batches of Starlink internet satellites on a regular basis over the coming year. The 45th Space Wing also is preparing for the introduction of new vehicle, United Launch Alliance’s Vulcan Centaur that is projected to fly for the first time in late 2021.

The 45th Space Wing has a new commander, Brig. Gen. Stephen Purdy, who was sworn in Jan. 5.