Astronauts aboard the International Space Station celebrated the New Year in part by eating radishes, the first vegetables grown in space besides leafy greens. The space radishes were grown from seeds over the past 27 days in the microgravity of orbit as part of NASA's program to develop space agriculture. The astronauts appreciated having fresh produce on the orbiting space labo

Astronauts aboard the International Space Station celebrated the New Year in part by eating radishes, the first vegetables grown in space besides leafy greens.

The space radishes were grown from seeds over the past 27 days in the microgravity of orbit as part of NASA's program to develop space agriculture.

Astronaut Kate Rubins "commented that the radishes were just as tasty as what she'd grown in her garden," said Hasenstein, who is a professor of biology at the University of Louisiana.

Rubins harvested the radishes Thursday, clipping off their leaves first to preserve some for scientific study after they return to Earth.

Rubins and astronaut Mike Hopkins "stated that eating something fresh was a most enjoyable experience," Hasenstein said.

He said astronauts also harvested similar radishes in late November, but NASA prevented astronauts from eating them as the agency evaluated possible contamination that could occur with the small orbiting farm operation.

"The radishes grown on the space station are cleaner than anything you'd buy at the store," Hasenstein said.

The space station has the largest crew in years living and performing scientific experiments on board -- four U.S. astronauts, two Russian cosmonauts and a Japanese astronaut.

The five astronauts in orbit posted a short video on Twitter on Wednesday wishing those on Earth a happy new year. It showed Rubins lofting a blowup Earth ball into the air as the crew counted down.

"We hope this inspires you to celebrate in your own way. Three, two, one!" Rubins said.

It was only a coincidence that the New Year's celebration coincided with the first consumption of radishes grown on board, said Dave Reed, director of Florida operations for Techshot, the Indiana-based company that makes the growing chamber for the vegetable.

"The radishes looked great. We harvested 19, and nine were offered to the crew to eat," Reed said. "The other 10 radishes were frozen for return to Earth and for post-flight analysis."

The radishes are grown in a bed of small clay balls, which retain moisture, and fertilizer, with artificial light. The growing chamber, or Advanced Plant Habitat, is a container about 20 inches in height, width and depth, Reed said. It's part of NASA's Plant Habitat-02 experiment.

What crops NASA will tackle for space farming next depends on how the radish evaluation turns out, Hasenstein said.

"We hope to get some of the frozen radishes back in March and compare them to radishes grown on Earth under the exact same conditions," he said. 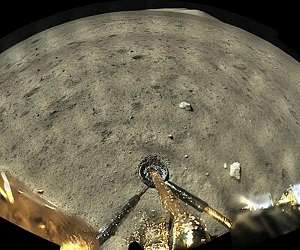 Rice seeds carried to the moon and back sprout
Beijing (XNA) Jan 01, 2021
Some of the 40 grams of rice seeds that made a round trip to the moon have sprouted and are ready for follow-up studies, according to Science Daily on Monday. The rice seeds traveled to the moon and returned to Earth after 23 days of flight aboard China's Chang'e 5 lunar probe. This marks the first time China conducted a deep space induced mutation breeding experiment on rice. The seeds were handed over to their provider, the National Engineering Research Center of Plant Space Breeding of So ... read more