Arianespace to launch next OneWeb batch from Vostochny Cosmodrome

Flight ST29, the first commercial mission from Vostochny Cosmodrome performed by Arianespace and its Starsem affiliate, will put 36 of OneWeb's satellites into a near-polar orbit at an altitude of 450 kilometers. After separation, the satellites will raise themselves to their operational orbit. The first six OneWeb satellites were successfully orbited by Arianespace on Soyuz Flight VS21 fr

Flight ST29, the first commercial mission from Vostochny Cosmodrome performed by Arianespace and its Starsem affiliate, will put 36 of OneWeb's satellites into a near-polar orbit at an altitude of 450 kilometers. After separation, the satellites will raise themselves to their operational orbit.

OneWeb's mission is to bring internet everywhere to everyone, by creating a global connectivity platform through a next generation satellite constellation in low Earth orbit. OneWeb's constellation will deliver high-speed, low-latency connectivity services to a wide range of customer sectors including aviation, maritime, backhaul services, and for governments, emergency response services and more.

Central to its purpose, OneWeb seeks to bring connectivity to every place where fiber cannot reach, and thereby bridge the digital divide.

Once deployed, the OneWeb constellation will enable user terminals that are capable of offering 3G, LTE, 5G and Wi-Fi coverage, providing high-speed access globally - by air, sea and land.

OneWeb Satellites is a joint venture between OneWeb and Airbus Defence and Space, where OneWeb Satellites is the constellation's prime contractor. The satellites were built thanks to its leading-edge satellite manufacturing process that can build up to two satellites a day on a series production line dedicated to the assembly, integration, and testing of the satellites. Flight ST29 will orbit the 75th to 110th OneWeb satellites to be launched by Arianespace. 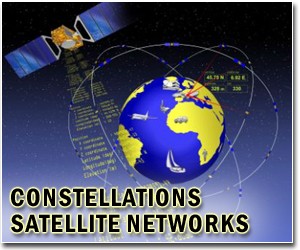 No pot of gold in commercial constellations
Paris, France (SPX) Dec 11, 2020
In its latest analysis of satellite manufacturing and launch services, "Satellites to be Built and Launched by 2029", Euroconsult anticipates almost a quintupling in satellite demand in the next decade with an average of 1,250 satellites to be launched on a yearly basis. In comparison to the 260 yearly satellites launched in the previous decade, this skyrocketing number cements the structural changes occurring in the market and the industry, not only in the number of satellites but also in terms o ... read more