NASA has delayed the test-firing of its SLS moon rocket that had been planned for Thursday to check out a faulty valve in the liquid propulsion system. When it happens, the test will ignite four powerful engines on the 212-foot-tall core stage of the Space Launch System rocket for four to eight minutes at the John C. Stennis Space Center in southern Mississippi. NASA is preparing the rocke

NASA has delayed the test-firing of its SLS moon rocket that had been planned for Thursday to check out a faulty valve in the liquid propulsion system.

When it happens, the test will ignite four powerful engines on the 212-foot-tall core stage of the Space Launch System rocket for four to eight minutes at the John C. Stennis Space Center in southern Mississippi. NASA is preparing the rocket for an uncrewed test flight around the moon, possibly by October. A previous attempt to complete a test-firing Jan. 16 ended prematurely when sensors shut the engines after a little more than one minute.

The test for the planned Artemis moon missions was the most powerful rocket test since the Apollo era at the facility. Even the truncated test-firing in January created huge clouds of steam from the cooling system, which uses 300,000 gallons of water per minute.

"This is not by any means a vanilla [simple] firing the core stage," John Shannon, vice president and SLS program manager at Boeing, which built the rocket, said during a press conference last week.

Shannon called the test "aggressive" because controllers will toggle the rocket's engines into various positions, putting stress on the components and systems.

"Our primary goal is to not only get the ... data, but also to protect the stage for the first flight," Shannon said. "So we're kind of threading the needle here between keeping the vehicle safe and gathering this data."

NASA leaders had warned that the test could be interrupted if test controllers felt the rocket would be damaged.

After the previous test, NASA said the agency had set parameters for the test too tightly, and while no significant problems developed with the rocket or its engines, more data was needed.

The test is intended to provide insight into how the rocket would perform during a launch toward the moon. The eight-minute firing time represents how long those engines would fire to propel the rocket to 100 miles above the Earth.

But the four-minute mark is "really where we collect all of our verification data, and so we're considering that as our minimum success time," said Julie Bassler, a NASA manager for the rocket program.

The rocket and its engines are covered with 1,400 sensors that will measure pressure, temperature and vibration, among other readings, NASA officials said.

After the test, NASA plans to refurbish the core stage and ship it to Kennedy Space Center in Florida.

When the rocket is prepared for a lunar launch, it will have two large solid-rocket boosters to provide 8.8 million pounds of total thrust - 15 percent more power than the Saturn V rocket that took astronauts to the moon during the Apollo era.

The first Artemis mission was supposed to be part of NASA's plan to return astronauts to the moon by 2024, but NASA only has received a fraction of the funding it has requested for that timeline.

The SLS program is over budget at more than $9 billion, according to an official report from NASA's Office of Inspector General.

earlier report
NASA proceeds with plans for Second Hot Fire Test
by Jennifer Harbaugh for NASA Artemis Blogs
NASA plans to conduct a second Green Run hot fire test as early as the fourth week in February with the Space Launch System (SLS) rocket's core stage that will launch the Artemis I mission to the Moon. The Green Run is a comprehensive assessment of the rocket's core stage prior to launching Artemis missions.

While the first hot fire test marked a major milestone for the program with the firing of all four RS-25 engines together for the first time for about a minute, it ended earlier than planned. After evaluating data from the first hot fire and the prior seven Green Run tests, NASA and core stage lead contractor Boeing determined that a second, longer hot fire test should be conducted and would pose minimal risk to the Artemis I core stage while providing valuable data to help certify the core stage for flight.

Inspections showed the core stage hardware, including its engines, and the B-2 test stand are in excellent condition after the first hot fire test, and no major repairs are needed to prepare for a second hot fire test at NASA's Stennis Space Center in Bay St. Louis, Mississippi.

All SLS rockets use the same core stage design, so a second Green Run hot fire will reduce risk for not only Artemis I, but also for all future SLS missions. The Green Run series of tests is designed to certify the core stage design and verify that the new stage is ready for flight. The hot fire test is the final Green Run test and will provide valuable data that minimizes risk for American deep space exploration missions for years to come.

+ completing the terminal countdown sequence that is like the launch countdown

+ pressuring the tanks and delivering propellant to the engines and demonstrating performance of the core stage's main propulsion system,

+ firing the engines at 109 percent power level, and

+ operating the thrust vector control system that steers the engines.

They are also updating conservative control logic parameters that resulted in the flight computer ending the first hot fire test earlier than planned. The team has already repaired the faulty electrical harness which resulted in a notification of a Major Component Failure on Engine 4. This instrumentation issue did not affect the engine's performance and did not contribute to ending the first test early.

After the second hot fire test, it will take about a month to refurbish the core stage and its engines. Then, the Pegasus barge will transport the core stage to NASA's Kennedy Space Center in Florida where it will be assembled with the other parts of the SLS rocket and the Orion spacecraft being prepared for the Artemis I launch later this year. 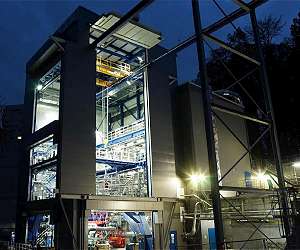 DLR ready to test first upper stage for Ariane 6
Lampoldshausen, Germany (SPX) Feb 16, 2021
On 14 February 2021, the German Aerospace Center (Deutsches Zentrum fur Luft- und Raumfahrt; DLR) will receive the first upper stage of the European Ariane 6 launcher. The fully functional test module will be subjected to extensive testing at DLR's Lampoldshausen site over the coming months. The aim is to verify that the rocket's upper stage is fit for flight - a major milestone on the way to its first launch, which is planned for the second quarter of 2022. After being manufactured at the ArianeG ... read more