THE NEXT GENERATION OF MARITIME COMMUNICATIONS 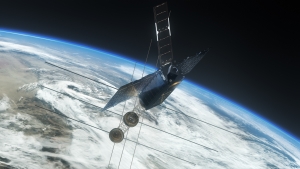 AAC Clyde Space AB, SAAB AB and ORBCOMM Inc. have today announced the development of the next generation of space based VDES system, marking the beginning of a new era in maritime communications. AAC Clyde Space AB will receive 17.0 MSEK in total,  of which 12.2 MSEK is in the form of a grant from the Swedish Transport Administration, to finance the building, launch and commissioning of the first satellite in the project. This is intended to be the first satellite of a future constellation to provide a VDES service.

Gossamer Deorbiter Sail: The purpose of this project is to develop a gossamer sail system that can be used for deorbiting satellites at end-of-life.

The principle that the system will use to achieve deorbiting is aerodynamic drag from the larger surface area. The system is intended mainly for low Earth orbit (LEO) telecom satellites but can potentially also be used in higher orbits, making use of solar radiation pressure to perform end-of-life manoeuvres.

Since there were many unfinished or failed attempts to prove that solar sailing is operational, ESA and DLR decided to start the collaborative Gossamer project. When all three steps of the Gossamer roadmap have successfully been completed, the solar sail propulsion will be declared operational and can be used in space mission. To ensure that Gossamer will not fail, ESA and DLR concentrate on a pure technological demonstrator mission with increasing complexity and level of difficulty in the three steps. Moreover, any scientific payload will be abandoned. It shall also be secured, that all Gossamer technologies are scalable. To avoid a failure in material or technologies, only those are used which have previously been proved and tested in numerous studies and projects. Finally, the Gossamer project and its technological success shall be perfectly documented and communicated to potential users.