D-Orbit signs contract with the European Space Agency under the Boost! Project

The UK branch of D-Orbit, a leader in the orbital transportation industry, has announced the signing of a contract with the European Space Agency (ESA) under the Boost! Project with ESA's Commercial Space Transportation Services and Support Programme. The Responsive Microlauncher Service, which provides end-to-end delivery of payloads in orbit, is designed to utilise the upcoming small lau

The UK branch of D-Orbit, a leader in the orbital transportation industry, has announced the signing of a contract with the European Space Agency (ESA) under the Boost! Project with ESA's Commercial Space Transportation Services and Support Programme.

The Responsive Microlauncher Service, which provides end-to-end delivery of payloads in orbit, is designed to utilise the upcoming small launchers that are due to be launching regularly from UK starting from 2022. The contract will focus on logistics coordination and process standardisation between different European spaceports and launcher providers.

D-Orbit is ideally placed to offer end-to-end commercial space transportation services, according to the ambitions and requirements of the ESA Boost! Project. The UK branch of D-Orbit will play a

"We aim to exploit the D-Orbit group's unique position in the value chain and develop a suite of small satellite focused value-added services, to actively drive business towards these new market players - this is the opportunity for the UK business" commented Chris Brunskill, Head of Programmes at D-Orbit UK "Boost! support is a critical enabler and catalyst in realising this vision in a timely manner as we collectively work together in achieving the Governments' targets set out in the Integrated Review and the Space Growth Strategy."

With one mission concluded successfully, one mid-course, and a third launched on board SpaceX Transporter-2 mission, D-Orbit's ION Satellite Carrier, the company orbital transportation vehicle (OTV), has already demonstrated the capability to transport small satellites into space and place them into precise, independent orbital slots.

The Commercial Space Transportation Services and Support Programme contract will bring this service into the UK, taking advantage of the dynamic new microlaunch capabilities, adding integration and other features to maximize responsiveness to user needs, establishing D-Orbit as a key enabling provider in an end-to-end UK supply chain that transports and operates space assets into orbit.

The UK team of D-Orbit will be the primary interface between satellite operators and launch operators. For every given satellite or payload, D-Orbit will identify the optimal microlauncher-spaceport combination that is compatible with the satellite's dimensions, its operational orbit, and the desired launch window.

The project is also backed by D-Orbit's Portuguese team, which will support the development of the enhanced service management software, an extension of the company's Aurora mission control suite. This project also establishes a new partnership with Spaceport Cornwall and is a wide-reaching collaboration across key actors in the supply chain. Furthermore, the project will initially include the design of a variant of the ION spacecraft, which will then progress to manufacturing using components from the UK supply chain.

The UK Space Agency invested 12 million pounds into the Boost! programme in 2019, one of the largest investments from ESA member states. The overall value of the Boost! contract for D-Orbit and the consortium partners is 1.6 million pounds, of which 1 million pounds in ESA contributions via UKSA and PT Space. The funding will enable D-Orbit to benefit from ESA's pioneering facilities, technical teams, and business networks.

Ian Annett, Deputy CEO, UK Space Agency said: "This funding is excellent news for the D-Orbit and for the UK space sector. Their standardised end-to-end transportation services will promote increased cohesion between European spaceports and launch providers, encouraging greater international collaboration. This support, alongside our world-class talent in the space sector, means the UK will be well-placed to exploit the opportunities that commercial launch from the UK will bring."

The new service is based at the Spaceport Cornwall Centre for Space Technologies, acting as a gateway in collaboration with other spaceports across the UK and Europe. Indeed, operators at two additional Spaceports are members of the consortium: ScotSpace Ltd at Prestwick Spaceport, which will act as the logistics, integration and operations support hub for the Scottish launch sites of the project, in addition to providing access to local launch services, and the Atlantic Spaceport Consortium (ASC), working from the Azores, Portugal.

The ASC will lead a Portuguese component in the service project, supported through this Boost! Contract, and will demonstrate the operational feasibility to implement the Responsive Microlauncher Service from the Azores, including the development and deployment of some of the required infrastructure elements. ASC is supported by Optimal Structural Solutions, as infrastructure provider and supply chain representation, and Ilex Space, as end-user-representation and commercial broker.

The Portuguese contribution allows D-Orbit to provide additional options to potential customers as it will aim at defining some standard practices across different spaceports.

Virgin Orbit, Richard Branson's responsive launch company, and Skyrora, a leading microlauncher provider, will each be working with D-Orbit to ensure the service is fully tailored to the respective characteristics of their unique offerings. Sky and Space Company (SAS) will also be involved, as part of its professional services, as reference satellite operator, payload customer, and service end-user.

The Satellite Applications Catapult are also a key partner and will be supporting market surveys, service definition and liaising with Spaceport Cornwall on the specification, funding and operation of physical service facilities. 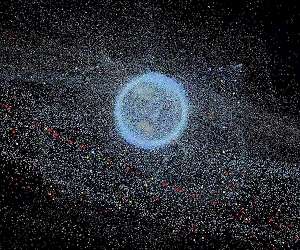 New UK Space Fund aims to make space safer
London, UK (SPX) Jul 15, 2021
One of the biggest challenges facing the space sector is orbital congestion and space debris. There are currently around 3,000 working satellites in orbit, and an estimated 130 million other pieces of debris, including old satellites, spent rocket bodies and even tools dropped by astronauts. One collision could create thousands of small, fast-moving fragments, damaging the satellites that provide everyday services such as communications, weather forecasting or satellite navigation. This funding wi ... read more