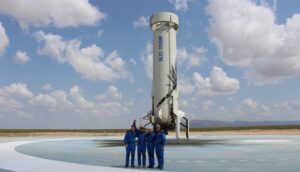 VAN HORN, Texas — Jeff Bezos and the others who were on the first crewed flight of Blue Origin’s New Shepard suborbital vehicle hailed the experience as better than expected, but Bezos is facing a backlash for spending part of his extreme wealth on space.

In a ceremony a couple hours after their brief suborbital spaceflight July 20, Blue Origin awarded their version of astronaut wings to Bezos, his brother Mark Bezos, Wally Funk and Oliver Daemen. The four then described the experience of the 10-minute flight to an altitude of 107 kilometers.

“My expectations were high, and they were dramatically exceeded,” Jeff Bezos said. That included both the several minutes of microgravity and the view of the Earth from suborbital altitudes, which he called “very profound.”

“It was incredibly exhilarating,” Mark Bezos said, emphasizing the acceleration felt during launch and reentry, which during reentry peaked at five times the force of gravity.

“It felt way cooler than it looked,” Daemen, who at 18 years old is now the youngest person to go to space, said after Blue Origin showed a video of the four of them moving around the cabin while in microgravity.

The 82-year-old Funk, now the oldest person to go to space, was the only one to offer even slightly critical comments about the experience. “I loved every minute of it. I just wish it was longer,” she said. “There was not quite enough room for all four of us.” The New Shepard cabin is designed to carry up to six people.

However, she added, “It was great. I loved it. I can hardly wait to go again.”

At the ceremony, Jeff Bezos reiterated past statements by Blue Origin officials that the company is planning two more crewed flights of New Shepard the rest of this year. “What we do in the following year I’m not sure yet. We’ll figure that out, and what the cadence will eventually be,” he said.

The company has quietly been selling tickets for future flights through private sales, starting with participants in the June auction. “We’re approaching $100 million in private sales already, and the demand is very, very high,” he said.

He emphasized his desire to reach a very high flight rate, which will require building new vehicles with longer lifetimes. The vehicle flown on the July 20 flight is designed to make 25 flights; this was its third.

The successful flight generated widespread public interest as well as praise from many in space industry, including suborbital spaceflight rival Virgin Galactic. “It continues to be a great time for commercial space travel!” that company tweeted after the flight. “Congrats to @blueorigin on today’s successful flight, together we’ll open space for good!”

It also got the attention of the White House. “The United States is the first country to have private companies taking private passengers to space. This is a moment of American exceptionalism. That’s how we see it,” White House press secretary Jen Psaki said at a July 20 briefing. “It will be the ingenuity of all of our commercial partners to help us continue advancing to the next stage of our nation’s space exploration.”

Others, though, saw nothing about the suborbital flight to praise. Shortly after New Shepard landed, Rep. Earl Blumenauer (D-Ore.), a member of the House Ways and Means Committee, announced his intent to introduce legislation to tax commercial human spaceflight launches that lack a scientific purpose.

“Space exploration isn’t a tax-free holiday for the wealthy. Just as normal Americans pay taxes when they buy airline tickets, billionaires who fly into space to produce nothing of scientific value should do the same, and then some,” he said in a statement.

His proposed Securing Protections Against Carbon Emissions (SPACE) Tax Act would levy a per-passenger tax on space tourism at two different rates: one for suborbital flights and a higher rate for orbital flights.

Blumenauer didn’t disclose additional details about the SPACE Tax Act, and a spokesperson said he would introduce the bill in the “coming weeks” after consultations with experts.

Another member of Congress suggested that Blue Origin was distracted by its New Shepard flight from other work, notably the development of the BE-4 engine that will power both its own New Glenn rocket and United Launch Alliance’s Vulcan. “Congratulations to @blueorigin on your successful space flight. The future is bright for American space innovation,” tweeted Rep. Doug Lamborn (R-Colo.) “Now please get back to work on the engines for @ulalaunch’s Vulcan rocket.”

At the ceremony, Jeff Bezos did not directly address those criticisms or more general ones about Bezos’s wealth and his decision to spend it on space rather than more terrestrial pursuits. He emphasized, though, the value of seeing the Earth from space to better appreciate the environment, calling the Earth the “only good planet in the solar system.”

Bezos diverged from discussing Blue Origin to announce a new project, the Courage and Civility Award. He gave the first two such awards to activist and political commentator Van Jones and to chef and humanitarian José Andrés. Each received $100 million from Bezos.

Bezos also benefited from the presence of Funk, who often stole the show with her enthusiasm about going to space six decades after being one of the “Mercury 13” women who passed astronaut medical examinations but never had the opportunity to become NASA astronauts. “Wally Funk is now on my list of people that I would most like to meet in the country,” Psaki said at the White House briefing. “She’s America’s new sweetheart.”