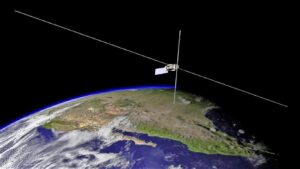 WASHINGTON —  The U.S. Air Force Research Laboratory announced July 19 it has completed a two-year experiment that will help better understand the effects of radiation on space hardware in medium Earth orbit.

Known as the Demonstration and Science Experiments (DSX) mission, the spacecraft was one of 24 payloads launched June 25, 2019, on a SpaceX Falcon Heavy rideshare.

AFRL had spent 16 years developing and testing DSX. The mission was to study the harsh radiation environment of medium orbits — from about 2,000 to 35,000 kilometers above Earth — where the Defense Department operates critical spacecraft like the Global Positioning System.

DSX was designed and built at AFRL’s Space Vehicles Directorate at Kirtland Air Force Base, New Mexico. Once deployed, DSX unfolded into a large structure spanning nearly the length of a football field.

“We completed more than 1,300 experiments,” said Johnston. “AFRL engineers and scientists will be analyzing the remarkable amount of data collected from the experiment for many years to come.”

The DSX mission ended May 31. AFRL engineer Rachel Delaney said the satellite was passivated, but was not deorbited.

Spacecraft in higher orbits go through a passivation process to lower the likelihood of creating space debris or interfering with operating spacecraft. They maneuver to a “disposal orbit” that’s not used by operating spacecraft. They are commanded to deplete any remaining propellant, turn off their transmitters, deplete their batteries and turn off any capability to recharge them to ensure they don’t explode or become a danger to the other objects in space.

“Because DSX was in a higher orbit not commonly used by spacecraft, it was not deorbited,” Delaney told SpaceNews. “Instead, commands were sent to render the spacecraft inoperable so it would not pose a risk to other operational satellites in the future.”