"Detecting primordial black holes opens up new perspectives to understand the origin of the Universe, because these still hypothetical black holes are supposed to have formed just a few tiny fractions of a second after the Big Bang. Their study is of great interest for research in theoretical physics and cosmology, because they could notably explain the origin of dark matter in the Universe".

"Detecting primordial black holes opens up new perspectives to understand the origin of the Universe, because these still hypothetical black holes are supposed to have formed just a few tiny fractions of a second after the Big Bang. Their study is of great interest for research in theoretical physics and cosmology, because they could notably explain the origin of dark matter in the Universe".

You can see stars in the eyes of the members of the team led by Professor Fuzfa, astrophysicist at UNamur, when talking about the perspectives of their research. This project is the result of an unprecedented collaboration between the UNamur and ULB, to which the ENS added thanks to the involvement of trainee student Leonard Lehoucq.

The idea was to combine the UNamur expertise in the field of gravitational wave antennas, an idea patented by Professor F?zfa in 2018 and studied by Nicolas Herman as part of his doctorate, with that of ULB in the booming field of primordial black holes, in which Professor Clesse is one of the central players.

Being able to observe smaller black holes, the mass of a planet but a few centimeters in size, would make the difference," the team of researchers says. They carry on: "We are offering experimenters a device that could detect them, by capturing the gravitational waves they emit when merging and which are of much higher frequencies than those currently available".

This type of device, just a few meters in size, would be enough to detect fusions of primordial small black holes millions of light years from Earth. It is much more compact than the commonly used detectors (LIGO, Virgo and KAGRA interferometers) which are several kilometers long. The detection method makes it sensitive to very high frequency gravitational waves (in the order of 100 MHz, compared to 10-1000 Hz for LIGO / Virgo / Kagra), which are not produced by ordinary astrophysical sources such as fusions, neutron stars or stellar black holes.

On the other hand, it is ideal for the detection of small black holes, the mass of a planet and its size goes from a small ball to a tennis ball. "Our detector proposal combines well mastered and everyday life technologies such as magnetrons in microwave ovens, MRI magnets and radio antennas. But don't take your household appliances apart right away to start the adventure: read our article first, then order your equipment, understand the device and the signal that awaits you at the output," the researchers say laughingly.

This patented technique is currently at the stage of advanced theoretical modeling, but has all the necessary elements to enter a more concrete phase, with the construction of a prototype. In any case, it paves the way for fundamental research into the origins of our Universe. In addition to primordial black holes, this type of detector could also directly observe the gravitational waves emitted at the time of the Big Bang, and thus probe physics at much higher energies than the ones achieved in particle accelerators. 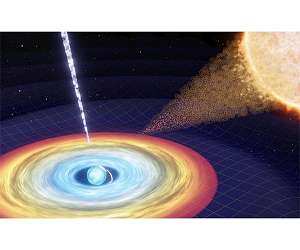 Scientists find new insights into the elusive continuous waves from spinning neutron stars
Melbourne, Australia (SPX) May 28, 2021
Five years on from the first discovery of gravitational waves, an international team of scientists, including from the ARC Centre of Excellence for Gravitational Wave Discovery (OzGrav), are continuing the hunt for new discoveries and insights into the Universe. Using the super-sensitive, kilometre-sized LIGO detectors in the United States, and the Virgo detector in Europe, the team have witnessed the explosive collisions of black holes and neutron stars. Recent studies, however, have been looking for s ... read more