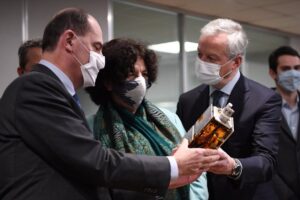 “This is the smallest Hall thruster ever flown and the first time a Hall thruster flew on a satellite of less than 100 kilograms,” Exotrail CEO David Henri told SpaceNews.

“This kind of technology is used on large satellites because of its superior level of performance. We are bringing the performance level to the world of smaller satellites.”

In late December, Exotrail ignited its ExoMG Hall-effect electric propulsion system and demonstrated it could change the altitude of R2, a six-unit cubesat launched in November on an Indian Polar Satellite Launch Vehicle. Over the next few months, the Exotrail plans to fire the thruster to demonstrate collision-avoidance maneuvers, decrease the satellite’s altitude and change its inclination, Henri said.

With the new thruster, Exotrail customers can opt for an inexpensive rideshare flights and propel themselves to their optimal orbits, Henri said. In addition, satellites weighing anywhere from 10 to 250 kilograms can use ExoMG to maintain their orbit and to deorbit at the end of their missions, he added.

The ExoMG model demonstrated in orbit fits in a two-unit cubesat. Exotrail has developed a one-unit version of ExoMG, a product AAC Clyde Space is purchasing for Eutelsat’s internet-of-things constellation, Henri said.

Exotrail, founded in 2017, signed contracts in 2020 worth more than 1 million euros ($1.2 million) with customers including the European Space Agency, the French space agency CNES and AAC Clyde Space. Exotrail also raised 11 million euros in an investment round announced in July.