The ascender of China's Chang'e 5 probe departed from the lunar orbit under ground commands at 6:59 am and landed on the moon at 7:30 am Tuesday (Beijing Time), sources with the China National Space Administration said. The ascender previously took off from the lunar surface and completed rendezvous and docking with the probe's orbiter-returner combination in the lunar orbit. After t

The ascender of China's Chang'e 5 probe departed from the lunar orbit under ground commands at 6:59 am and landed on the moon at 7:30 am Tuesday (Beijing Time), sources with the China National Space Administration said.

The ascender previously took off from the lunar surface and completed rendezvous and docking with the probe's orbiter-returner combination in the lunar orbit.

After transferring samples collected on the moon to the returner, the ascender separated from the orbiter-returner combination on Dec 6.

Tuesday's maneuver marks the completion of the ascender's mission, according to the space administration.

Deorbiting and moon landing of the spacecraft can prevent it from becoming space debris and affecting follow-up lunar missions of other countries, which is also an important commitment of China, as a responsible country, to the peaceful exploration and use of space by humankind, the administration said.

The Chang'e-5 probe, comprising an orbiter, a lander, an ascender and a returner, was launched on Nov 24.

Developed by Xu Weilin and his team from Wuhan Textile University, it is hoped the fabric will help make the flag stand up to the moon's severe environmental conditions.

Using embedded composite spinning technology, the color of the fabric is designed to resist fading under strong ultraviolet light exposure and to withstand plus and minus 150 C temperature changes, Xu said.

The flag weighs just 12 grams, according to the administration's website.

It is the first time a fabric Chinese national flag has been to the moon. In December 2013 and January 2019, China's national flag was seen on the moon as an emblem on a spacecraft, according to China Global Television Network. 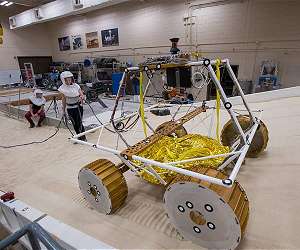 VIPER's Many Brains are Better than One
Washington DC (SPX) Dec 03, 2020
If you opened up a robot vacuum, a self-driving car, or even one of NASA's Mars rovers (which we're definitely not recommending you do!) you'd find a bunch of processors programmed with software that serve as the robot's "brains." All robots have these computerized brains directing their movement and activity, but NASA's Volatiles Investigating Polar Exploration Rover, or VIPER, will be the first off-world rover to have its brains split in two as it explores the Moon's surface in search of water ice. ... read more