An international research team including a number of scientists from the Max Planck Institute for Radio Astronomy in Bonn, Germany, used the APEX submillimeter telescope in 5100 m altitude in Chile to map an extended part of the Southern Galactic plane covering an area of more than 80 square degrees. Spectral lines emitted from several molecules, including the rare isotopologues 13CO and C18O of

An international research team including a number of scientists from the Max Planck Institute for Radio Astronomy in Bonn, Germany, used the APEX submillimeter telescope in 5100 m altitude in Chile to map an extended part of the Southern Galactic plane covering an area of more than 80 square degrees. Spectral lines emitted from several molecules, including the rare isotopologues 13CO and C18O of the carbon monoxide molecule, probed the moderately dense component of the interstellar medium.

The resulting survey, called SEDIGISM (Structure, Excitation and Dynamics of the Inner Galactic Interstellar Medium), reveals a wide range of structures, from individual star-forming clumps to giant molecular clouds and complexes. This survey allows us to constrain the large-scale distribution of cold molecular gas in the inner Galaxy and ultimately unravel the structure of the Milky Way.

The survey data are used to study the distribution of cold molecular clouds and the amount of star formation in the inner region of the Milky Way in unprecedented detail. A catalog of over 10,000 clouds in our Milky Way has already been compiled, showing a very homogeneous distribution of physical properties. Interestingly, only a small proportion (~10%) of these clouds exhibit ongoing star formation. Altogether, the SEDIGISM survey represents a significant step forward in understanding the structure of the Galaxy and the connection between spiral arms and molecular clouds whose denser parts harbour new generations of forming stars. The first data release makes these data available to the scientific community.

The initial results from this survey are presented in three publications (with first authors from MPIfR, Cardiff University and University of Kent) within the current issue of "Monthly Notices of the Royal Astronomical Society''.

Observations of spectral lines of the carbon monoxide molecule allow us to probe the cold and dense molecular phase of the interstellar medium, from which new stars form. In addition, the velocity of the clouds can be measured via their Doppler shift. This allows us to link the clouds to the rotation of the spiral structure of our Milky Way, thereby providing a three-dimensional view of their distribution, which shows a rich variety of structures, such as filaments and cavities, resulting from all the physical effects that shape the interstellar medium.

Using the APEX telescope in the Chilean Andes, an international team of about 50 astronomers has completed the analysis of this observational effort, which covers 84 square degrees of the southern inner Galaxy, ranging in Galactic longitude from -60 to +18 degrees with a resolution of 30 arc seconds, only about 1/60 of the projected moon diameter on the sky. With a velocity resolution of 0.25 km/s, it provides the morphology, distance information and kinematics of all Galactic molecular clouds in approximately 2/3 of the inner Milky Way disk.

The survey is called SEDIGISM (Structure, Excitation and Dynamics of the Inner Galactic Interstellar Medium) and includes data taken in the years 2013-17 that will now be released to the astronomical community together with the first three scientific publications on the full data set.

"With the publication of this unprecedentedly detailed map of cold clouds in our Milky Way a huge observational effort comes to fruition", says Frederic Schuller from the Max Planck Institute for Radio Astronomy (MPIfR), the principal investigator of the SEDIGISM survey. "The team did a great job in delivering a new roadmap for molecular gas in the Galaxy as legacy of APEX for years to come."

"Based on these data, a catalog of over 10,000 of these clouds in our Milky Way has been compiled, which show a highly structured Galactic distribution, albeit with relatively homogeneous physical properties, with only hints for potential environmental dependency of some cloud properties", explains Ana Duarte-Cabral from Cardiff University, the lead author of the second paper. James Urquhart from the University of Kent, the lead author of the third publication, adds: "In conjunction with the previous survey of cold dust emission in the Galaxy (ATLASGAL), the fraction of clouds associated with dense gas could be estimated: only 10% of the clouds are sites of ongoing star formation".

The observations targeted the rare 13CO and C18O isotopes of the carbon monoxide molecule that allow much more precise mass estimates of the clouds than the much more abundant 12CO, but require a very sensitive telescope. The 12-m APEX telescope (Fig. 2), with its precise mirror surface and a location at one of the world's best sites for (sub)millimeter astronomy, has been key for the success of the project. Located at 5100m on the dry Chajnantor plateau in Chile, the low water vapour content of the site leads to the very high transparency of the sky that is needed for such observations.

Molecular clouds consist of the raw material from which new stars form. Imaging these clouds is therefore essential to derive important parameters such as the star formation efficiency in our Galaxy. The morphology and physical conditions of the clouds also provide the initial conditions that theories of star formation have to take into account. It is, therefore, crucial to spatially resolve the clouds, which was possible with the high-angular resolution of the survey.

The survey is not only interesting on its own, but also complements a number of other outstanding Galactic plane surveys, conducted in the last decade in the mid- to far-infrared wavelength ranges with space-based telescopes such as Spitzer and Herschel and, at longer wavelengths with APEX itself, which are all lacking the velocity information. The data of these surveys can now be re-analysed in conjunction with the new carbon monoxide line data. This will significantly enhance their role in the ongoing quest to understand the formation of stars, stellar clusters and ultimately the structure and dynamics of the Milky Way.

"Our survey represents a significant step towards understanding the structure of the Galaxy in which we live", concludes Dario Colombo from MPIfR, co-author of all three publications, who is currently preparing another analysis of the data to establish the influence of spiral arms on molecular cloud properties.

Related Links
Max Planck Institute for Radio Astronomy
Stellar Chemistry, The Universe And All Within It 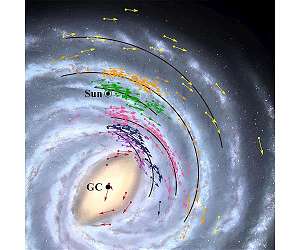 Earth faster, closer to black hole in new map of galaxy
Tokyo, Japan (SPX) Nov 30, 2020
Earth just got 7 km/s faster and about 2000 light-years closer to the supermassive black hole in the center of the Milky Way Galaxy. But don't worry, this doesn't mean that our planet is plunging towards the black hole. Instead the changes are results of a better model of the Milky Way Galaxy based on new observation data, including a catalog of objects observed over the course of more than 15 years by the Japanese radio astronomy project VERA. VERA (VLBI Exploration of Radio Astrometry, by ... read more