A two-year contract awarded to ABB from NASA's Jet Propulsion Laboratory will see key ABB/Nuvu Cameras technology fly onboard the space telescope in 2025, on course to capture the first spaceborne images of planets outside our solar system. The Nancy Grace Roman Space Telescope, NASA's future space observatory, is due to launch in 2025 in search of other earth-like worlds. It carries two i

A two-year contract awarded to ABB from NASA's Jet Propulsion Laboratory will see key ABB/Nuvu Cameras technology fly onboard the space telescope in 2025, on course to capture the first spaceborne images of planets outside our solar system.

The Nancy Grace Roman Space Telescope, NASA's future space observatory, is due to launch in 2025 in search of other earth-like worlds. It carries two instruments: one to study the mystery of dark energy distribution in the cosmos; and the first dedicated exoplanet imaging camera in space, the CGI (CoronaGraph Imager). Within the CGI will be two high sensitivity cameras with electronic cores developed by ABB together with Nuvu

Extra-solar planetary systems are extremely difficult to observe from large distances as planets are tremendously dimmer than their neighboring star and barely separated from one another. NASA's CGI complex arrangement of optical components manage to block out the star light and send the residual light of the nearby planet to a highly sensitive camera. This is where the unique ABB/Nuvu imaging solution comes at play in revealing the unusual dot that was previously invisible.

"The Roman mission is a $3.2 billion project which should be 100 to 1000 times more powerful for imaging exo-planets than what is achieved on the ground today. We are very proud to be supplying such a critical component in this groundbreaking mission. It is an exciting project which will require our most advanced technological expertise to succeed," stated Marc Corriveau, General Manager ABB Measurement and Analytics Canada.

"We are thankful to the Canadian Space Agency (CSA) Space Technology Development Program which enabled this revolutionary camera technology to be brought to a maturity level sufficient for its consideration by NASA's Jet Propulsion Laboratory," said Olivier Daigle, Chief Technology Officer at Nuvu Cameras.

The ABB contract win follows a recent contract award from GHGSAT, a private satellite constellation operator, to supply additional optical sensors capable of imaging methane leaks on the ground in high definition. ABB optical equipment already in space cumulates more than 90 years of reliable operation. Since 2003, the SCISAT sensor has tracked long-term composition changes down to parts per trillion of more than 60 molecules and pollutants in the earth's atmosphere.

Weather agencies around the world base their predictions on ABB technology at the heart of the latest generation of polar satellites of the United States' National Oceanic and Atmospheric Administration (NOAA), which saves lives by improving the timeliness and accuracy of weather forecasts for up to seven days. ABB sensors are also flying onboard the Japanese GOSAT 1 and 2 satellites monitoring at high accuracy the steady rise of greenhouse gases around the world since 2009.


Related Links
Nuvu Cameras
Stellar Chemistry, The Universe And All Within It 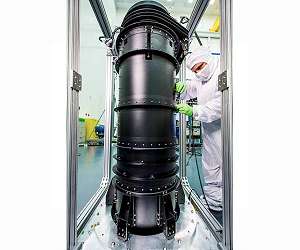 NASA's Webb Completes Significant Testing Milestone for Deployable Tower
Greenbelt MD (SPX) Nov 20, 2020
NASA's James Webb Space Telescope marked another significant testing milestone with the successful deployment of a critical structure that plays an important role in how the observatory will unfurl and deploy once in space. The Deployable Tower Assembly is an integral piece in the operation and support of the spacecraft and telescope structures. It also helps Webb maintain its necessary operating temperatures by separating its mirrors from the comparatively warmer Sun-facing side and spacecraft bu ... read more