Using Planck data from the cosmic microwave background radiation, an international team of researchers has observed a hint of new physics. The team developed a new method to measure the polarization angle of the ancient light by calibrating it with dust emission from our own Milky Way. While the signal is not detected with enough precision to draw definite conclusions, it may suggest that dark m

Using Planck data from the cosmic microwave background radiation, an international team of researchers has observed a hint of new physics. The team developed a new method to measure the polarization angle of the ancient light by calibrating it with dust emission from our own Milky Way. While the signal is not detected with enough precision to draw definite conclusions, it may suggest that dark matter or dark energy causes a violation of the so-called "parity symmetry."

The laws of physics governing the Universe are thought not to change when flipped around in a mirror. For example, electromagnetism works the same regardless of whether you are in the original system, or in a mirrored system in which all spatial coordinates have been flipped. If this symmetry, called "parity," is violated, it may hold the key to understanding the elusive nature of dark matter and dark energy, which occupy 25 and 70 percent of the energy budget of the Universe today, respectively. While both dark, these two components have opposite effects on the evolution of the Universe: dark matter attracts, while dark energy causes the Universe to expand ever faster.

A new study, including researchers from the Institute of Particle and Nuclear Studies (IPNS) at the High Energy Accelerator Research Organization (KEK), the Kavli Institute for the Physics and Mathematics of the Universe (Kavli IPMU) of the University of Tokyo, and the Max Planck Institute for Astrophysics (MPA), reports on a tantalizing hint of new physics-with 99.2 percent confidence level - which violates parity symmetry. Their findings were published in the journal Physical Review Letters on November 23, 2020; the paper was selected as the "Editors' Suggestion," judged by editors of the journal to be important, interesting, and well written.

The hint to a violation of parity symmetry was found in the cosmic microwave background radiation, the remnant light of the Big Bang. The key is the polarized light of the cosmic microwave background. Light is a propagating electromagnetic wave. When it consists of waves oscillating in a preferred direction, physicists call it "polarized." The polarization arises when the light is scattered. Sunlight, for instance, consists of waves with all possible oscillating directions; thus, it is not polarized.

The light of a rainbow, meanwhile, is polarized because the sunlight is scattered by water droplets in the atmosphere. Similarly, the light of the cosmic microwave background initially became polarized when scattered by electrons 400,000 years after the Big Bang. As this light traveled through the Universe for 13.8 billion years, the interaction of the cosmic microwave background with dark matter or dark energy could cause the plane of polarization to rotate by an angle ss (Figure).

"If dark matter or dark energy interact with the light of the cosmic microwave background in a way that violates parity symmetry, we can find its signature in the polarization data," points out Yuto Minami, a postdoctoral fellow at IPNS, KEK.

To measure the rotation angle ss, the scientists needed polarization-sensitive detectors, such as those onboard the Planck satellite of the European Space Agency (ESA). And they needed to know how the polarization-sensitive detectors are oriented relative to the sky. If this information was not known with sufficient precision, the measured polarization plane would appear to be rotated artificially, creating a false signal. In the past, uncertainties over the artificial rotation introduced by the detectors themselves limited the measurement accuracy of the cosmic polarization angle ss.

"We developed a new method to determine the artificial rotation using the polarized light emitted by dust in our Milky Way," said Minami. "With this method, we have achieved a precision that is twice that of the previous work, and are finally able to measure ss." The distance traveled by the light from dust within the Milky Way is much shorter than that of the cosmic microwave background. This means that the dust emission is not affected by dark matter or dark energy, i.e. ss is present only in the light of the cosmic microwave background, while the artificial rotation affects both. The difference in the measured polarization angle between both sources of light can thus be used to measure ss.

The research team applied the new method to measure ss from the polarization data taken by the Planck satellite. They found a hint for violation of parity symmetry with 99.2 percent confidence level.

To claim a discovery of new physics, much greater statistical significance, or a confidence level of 99.99995 percent, is required. Eiichiro Komatsu, director at the MPA and Principal Investigator at the Kavli IPMU, said: "It is clear that we have not found definitive evidence for new physics yet; higher statistical significance is needed to confirm this signal. But we are excited because our new method finally allowed us to make this 'impossible' measurement, which may point to new physics."

To confirm this signal, the new method can be applied to any of the existing- and future-experiments measuring polarization of the cosmic microwave background, such as Simons Array and LiteBIRD, in which both KEK and the Kavli IPMU are involved. 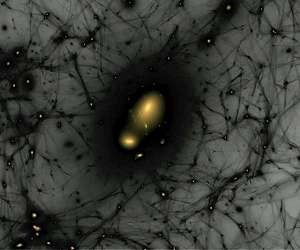 NASA's Roman Space Telescope to Uncover Echoes of the Universe's Creation
Greenbelt MD (SPX) Nov 19, 2020
NASA's Nancy Grace Roman Space Telescope will detect vestiges of sound waves that once rippled through the primordial cosmic sea. According to new simulations, Roman's observations could extend these measurements into an unprobed epoch between the universe's infancy and the present day. Studying the echoes from this era will help us trace the evolution of the universe and solve pressing cosmic conundrums. Sound waves from the nascent universe, called baryon acoustic oscillations (BAOs), left their ... read more