A terrestrial-mass planet on the run?

Scientists have long believed that there may be billions to trillions of rogue planets drifting through our galaxy, unattached to any host star. A recent study has now identified one such candidate - potentially the first terrestrial-mass world we've spotted on the run. We've discovered more than 4,000 exoplanets in the last three decades, spanning a dramatic range of masses, sizes, temper

Scientists have long believed that there may be billions to trillions of rogue planets drifting through our galaxy, unattached to any host star. A recent study has now identified one such candidate - potentially the first terrestrial-mass world we've spotted on the run.

We've discovered more than 4,000 exoplanets in the last three decades, spanning a dramatic range of masses, sizes, temperatures, compositions, orbital properties, and more. The vast majority of them, however, share one feature: they all orbit a star.

While this may seem like normal behavior - after all, we're rather attached to our own star, here on Earth - planetary formation models predict that there should be a large population of free-floating planets in our galaxy. According to the models, these typically sub-Earth-mass planets get kicked out from their parent systems through interactions with other bodies (usually bullying gas giants).

How can we observationally confirm this picture? Without the beacon of a host star's light, free-floating planets are challenging to detect - but they're discoverable via a method called gravitational microlensing.

The Lens Is the Thing
When light from a background source passes by a massive body on its way to us, the intervening object acts as a gravitational lens, bending the light.

In the case of microlensing, the intervening lens object is small - a stellar- or planetary-mass object - so the lensing doesn't produce a resolvable ring of light like in strong lensing. Instead, we see a brief brightening of the background source as the lens passes in front of it. From the shape of the light curve, we can then infer lens and source properties.

Roughly 100 planets have been discovered in microlensing events so far - but in most of these cases, the lensing mass is actually a combination of a planet and its host star. Only a handful of objects have been found so far that might be free-floating planets, and they've all been of relatively large mass.

That is, until now.

The event was located in high-cadence survey fields, so though the brightening timescale was just 41.5 minutes, the Optical Gravitational Lensing Experiment (OGLE) and the Korea Microlensing Telescope Network (KMTN) managed to capture a joint total of 15 magnified data points. By modeling the light curve, the authors establish that OGLE-2016-BLG-1928 is either a free-floating planet, or its host is located at least 8 au away from it.

Assuming that the planet is located in the galactic disk (which the authors deem likely based on their data), it's estimated to weigh ~0.3 Earth mass, or roughly 3 times the mass of Mars.

So how do our prospects look for finding more of these free-floating low-mass planets and verifying the expectation that they're plentiful? Certainly, this OGLE detection proves it's possible - and with the power of upcoming observatories like the Nancy Grace Roman Space Telescope, odds are good that we'll be able to spot more of these drifting terrestrial worlds. 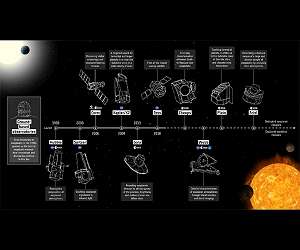 Ariel moves from blueprint to reality
Paris (ESA) Nov 16, 2020
ESA's exoplanet mission Ariel, scheduled for launch in 2029, has moved from study to implementation phase, following which an industrial contractor will be selected to build the spacecraft. Ariel, the Atmospheric remote-sensing infrared exoplanet large-survey mission, addresses one of the key themes of ESA's Cosmic Vision programme: What are the conditions for planet formation and the emergence of life? Ariel will study what exoplanets are made of, how they formed and how they evolve, by surveying ... read more