20 Years of Observing Earth from the International Space Station

After 20 years of continuous human presence, the International Space Station (ISS) has provided 241 visitors with an extraordinary view of Earth from outer space - one they have shared with the rest of the world. Astronaut photography, formally called Crew Earth Observations (CEO), has resulted in more than 3.5 million photographs of the ever-changing blue planet. But camera-wielding astro

After 20 years of continuous human presence, the International Space Station (ISS) has provided 241 visitors with an extraordinary view of Earth from outer space - one they have shared with the rest of the world.

Astronaut photography, formally called Crew Earth Observations (CEO), has resulted in more than 3.5 million photographs of the ever-changing blue planet. But camera-wielding astronauts are not the only ones looking down at Earth from their perch in the sky. An impressive suite of Earth Science instruments have also visited the station to capture vast amounts of data about our planet.

However, space aboard the station itself is limited, and the spots are highly coveted. Instruments go through a rigorous approval process and cycle through every couple of years, turning the station into a virtual swiss-army knife of interchangeable remote sensing tools. An especially comprehensive suite of Earth observing instruments are currently aboard the station, with two more approved and several more proposing to become future ISS instruments.

These instruments complement one another to provide a more complete picture of Earth systems, according to William Stefanov, branch chief for the Exploration Science Office at NASA's Johnson Space Center, and principal investigator for the Crew Earth Observations Facility on the International Space Station. "That's why it's serendipitously great that all of these instruments are on the International Space Station and functioning simultaneously," Stefanov said.

ECOSTRESS
The human crew came in especially handy for the Ecosystem Spaceborne Thermal Radiometer Experiment on Space Station (ECOSTRESS) instrument, which records the temperature of plants on Earth's surface by measuring the heat they give off. The instrument required the addition of Wi-Fi modules to transmit its data to the station, which in turn required astronauts to conduct a spacewalk to install them.

Since then, ECOSTRESS has provided new insights into the relationship between plant temperatures and water usage. It can identify plant stress down to an individual farmer's field, when intervention and water management may still be possible to save crops.

Principal investigator Simon Hook says scientists have only just begun to scratch the surface of how the instrument can be used based on its frequent and high-resolution temperature measurements. There is work underway to use the temperature data to observe wildfires, droughts, volcanoes and heat waves, or even to identify heat patterns within urban cities.

GEDI
From fields to forests, another plant-focused instrument is the Global Ecosystem Dynamics Investigation (GEDI). Using lidar-a method of bouncing a laser off the planet and measuring how long it takes the signal to return-GEDI is creating a record of the three-dimensional structure world's tropical and temperate forests so that Earth's tree canopies can be mapped and tracked over time.

The vertical structure of forests, which is essentially the height of the trees and how their leaves and branches are arranged vertically, can help determine how much carbon storage is lost from deforestation or gained from growing forests. GEDI principal investigator Ralph Dubayah, professor of Geographical Sciences at the University of Maryland, College Park, says this is the biggest uncertainty we have about the global carbon cycle, and why there is so much attention put on understanding how deforestation and tree growth contribute to atmospheric carbon dioxide concentrations. GEDI is a collaborative effort between NASA and UMD.

To supply its high-power laser, GEDI takes advantage of the massive solar panels on the station. "Right now on the International Space Station we have an amazing confluence of instruments that together are able to observe ecosystem function, structure and plant composition," Dubayah said. "And it was entirely made possible because we have this incredible science platform in the ISS."

LIS
Being high above the clouds also makes the station a good platform for observing the weather. NASA's Lightning Imaging Sensor (LIS) records the time, energy output and locations of lightning events around the world in the lower atmosphere. It can provide information on when storms are growing or decaying, thereby helping to improve weather forecasting models and aircraft/spacecraft safety precautions.

It complements the Geostationary Lightning Mapper (GLM) aboard the Geostationary Operational Environmental Satellite (GOES-16), which is a collaboration between NASA, the National Atmospheric and Oceanic Administration (NOAA) and industry partners, and the European Space Agency's (ESA) monitoring of thunderstorms and upper atmosphere lightning events through the Atmosphere Space Interaction Monitor (ASIM) instrument which is on the ISS.

The data from ASIM and LIS are both able to capture the impacts of dust storms, pollution, fires, and volcanic eruptions on cloud formation and electrification. This is just one example of how ESA, and other international agencies including the German Aerospace Center (DLR) and the Japan Aerospace Exploration Agency (JAXA), are also helping advance a global understanding of our planet through ISS-instruments with Earth observations of their own.

OCO-3
Several instruments currently aboard the station are not the first of their kind. As the name might suggest, the Orbiting Carbon Observatory-3 (OCO-3) is a third iteration instrument for long-term monitoring of atmospheric carbon dioxide distributions around the globe, complementing long-term ground-based observations. It provides insights into regional carbon sources and sinks and monitors changes in the carbon cycle linked to human activity.

Together with GEDI and ECOSTRESS, OCO-3 contributes to a more complete picture of terrestrial ecosystems. While its predecessor, the OCO-2 satellite, followed a polar orbit, OCO-3's path aboard the station offers a denser data set for areas with large carbon fluxes, including Earth's most biologically diverse regions like the Amazon rainforest.

The orbit also allows measurements at different times of day, which especially benefits ECOSTRESS and OCO-3 as plants and their contribution to the carbon cycle fluctuate with time of day due to variations in sun, temperature and water availability.

SAGE III
Like OCO-3, the Stratospheric Aerosol and Gas Experiment (SAGE) III, is a third-generation instrument. The successive SAGE instruments have provided an ongoing record of Earth's upper atmospheric water vapor, aerosol and ozone - which make up the protective "sunscreen" layer for the planet.

When sunlight passes through the upper atmosphere, its unique mixture of particulates and gases create the picturesque colors of spectacular sunsets and sunrises. To replicate a sunset or sunrise view from the space station, SAGE III looks at Earth from a side angle, capturing a similar view of the atmosphere on its edge as someone watching the sunset from the ground. But from its vantage point of space, SAGE III can view the entirety of these atmospheric layers according to project scientist Dave Flittner, and sees 15 sunrises and sunsets every day.

Science manager Marilee Roell says the longevity of these observations has been crucial to monitoring and maintaining the protective ozone layer in the upper atmosphere. SAGE II closely monitored the past ozone decline from common aerosols in hair sprays and fire retardants that degraded the layer, and its data informed the Montreal Protocol Treaty, which phased out the use of these damaging chemicals.

"It's one of the biggest success stories of science informing policy," said Roell. "And not only is this a premier science instrument, but it's also on the International Space Station-a crewed platform. We are kind of getting the best of both science and getting to be a part of the human spaceflight program in a peripheral way."

TSIS-1 continues the work of NASA's Solar Radiation and Climate Experiment satellite by measuring the amount of sunlight that reaches Earth, and how it is distributed in wavelength.

These measurements of solar energy, along with model-based calculations of its absorption and reflection by Earth's atmosphere and surface, provide insights into the sun's influence on climate, the ozone layer, atmospheric circulation, and ecosystems. The data are critical inputs for modeling of Earth's climate and atmospheric systems.

COMING SOON: EMIT and CLARREO-PF
There is still more to learn about Earth, and new instruments which can further contribute to our understanding like the Climate Absolute Radiance and Refractivity Observatory (CLARREO) Pathfinder and the Earth Surface Mineral Dust Source Investigation (EMIT) are already scheduled to reach the station within the next couple of years.

The CLARREO Pathfinder will measure sunlight reflected off Earth, and take direct measurements of the Sun, with unparalleled accuracy. The data can then help calibrate other sensors starting in 2021. EMIT is scheduled to launch the following year in 2022 to map dust-source regions on Earth's surface and assess the impact of dust on the warming and cooling of the atmosphere.

"It's been really satisfying to see the range of things we have had on the space station," said Stefanov. From imaging systems to lasers and radars, and more recently hyperspectral instruments Stefanov believes that the limit to what they can do in the future is really only limited by what scientists and engineers are able to design and the number of instrument ports available.

"There will be opportunities for new sensors to go up to the station," he said. "And I think it will continue to develop as a very useful remote sensing platform for Earth observations going forward." 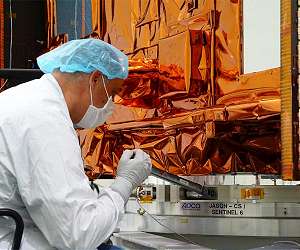 Contracts signed for three high-priority ESA environmental missions
Paris (ESA) Nov 17, 2020
ESA has signed contracts with Thales Alenia Space in France and in Italy, and Airbus in Spain to build three of the new high-priority Copernicus satellite missions: CHIME, CIMR and LSTM, respectively. Each mission is set to help address different major environmental challenges such as sustainable agriculture management, food security, the monitoring of polar ice supporting the EU Integrated Policy for the Arctic, and all will be used to understand climate change. There are six Copernicus high-prio ... read more