Sentinel-6 Michael Freilich, the latest in a series of spacecraft designed to monitor our oceans, was launched from Vandenberg Air Force Base in central California on Saturday, Nov. 21, 2020. The satellite will be followed in 2025 by its twin, Sentinel-6B. Together, the pair is tasked with extending our nearly 30-year-long record of global sea surface height measurements. Instrum

Sentinel-6 Michael Freilich, the latest in a series of spacecraft designed to monitor our oceans, is scheduled to launch from Vandenberg Air Force Base in central California on Saturday, Nov. 21, 2020. The satellite will be followed in 2025 by its twin, Sentinel-6B.

Together, the pair is tasked with extending our nearly 30-year-long record of global sea surface height measurements. Instruments aboard the satellites will also provide atmospheric data that will improve weather forecasts, climate models, and hurricane tracking.

A little more than two minutes after the Falcon 9 rocket lifts off, the main engine will cut off. Shortly after, the rocket's first and second stages will separate, followed by second-stage engine start. The reusable Falcon 9 first stage will then begin its automated boost-back burn to the launch site for a propulsive landing.

The first cutoff of the second stage engine will take place approximately eight minutes after liftoff. It will fire a second time 45 minutes later, at which point the launch vehicle and the spacecraft will be in a temporary "parking" orbit. Several minutes later, the launch vehicle and the spacecraft will separate. The satellite will begin solar panel deployment about one hour and seven minutes post-launch and is expected to make first contact about 25 minutes after that.

JPL, a division of Caltech in Pasadena, built three science instruments for each Sentinel-6 satellite: the Advanced Microwave Radiometer, the Global Navigation Satellite System - Radio Occultation, and the Laser Retroreflector Array. NASA is also contributing launch services, ground systems supporting operation of the NASA science instruments, the science data processors for two of these instruments, and support for the international Ocean Surface Topography Science Team. The launch is managed by NASA's Launch Services Program, based at the agency's Kennedy Space Center in Florida. 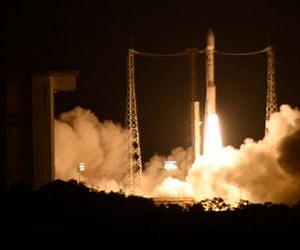 European Vega rocket failed 'because of wire mix-up'
Paris (AFP) Nov 17, 2020
The failure of a European rocket just minutes after lift-off was caused by a production mistake that led to a wiring mix-up and altered the trajectory, its operator said on Tuesday. The Vega, the lightest of Arianespace's three payload rockets, malfunctioned about eight minutes after launch from the space centre at Kourou, in French Guiana in South America, on Monday. It broke up in the atmosphere before falling into the Atlantic Ocean, destroying the two satellites it was carrying, including on ... read more