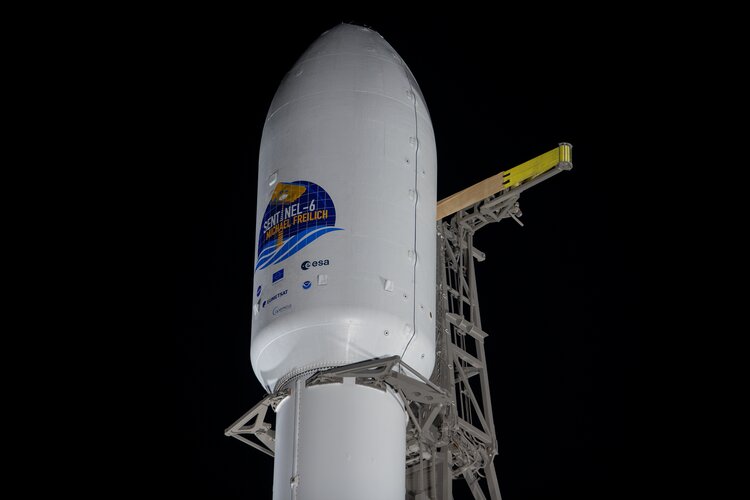 With liftoff set for today at 17:17 GMT (18:17 CET, 09:17 PST), the Copernicus Sentinel-6 Michael Freilich satellite is poised for liftoff – atop a Falcon 9 rocket on the launch pad at the Vandenberg Air Force Base in California, US.

Over the last three decades, the French–US Topex-Poseidon and Jason mission series served as reference missions, and in combination with ESA’s earlier ERS and Envisat satellites, as well as today’s CryoSat and Copernicus Sentinel-3, they have shown how sea level has risen about 3.2 mm on average every year. More alarmingly, this rate of rise has been accelerating; over the last few years, the average rate of rise has been 4.8 mm a year.

Copernicus Sentinel-6 is the next radar altimetry reference mission to extend this legacy of sea-surface height measurements until at least 2030.

Copernicus Sentinel-6 Michael Freilich was named in honour of the former head of NASA’s Earth science division. The name change not only recognises Dr Freilich’s outstanding contribution to the mission, but also his lifelong dedication to understanding our planet.

While Sentinel-6 is one of the European Union’s family of Copernicus missions, its implementation is the result of a unique cooperation between ESA, Eumetsat, NASA and NOAA, with contribution from the CNES French space agency.

Since its arrival at the launch site at the end of September, Sentinel-6 Michael Freilich has been thoroughly tested, fuelled and joined to the launch adapter, encapsulated in the rocket fairing, and now rolled out to the launch tower and integrated into the rest of the rocket.

With the launch dress rehearsal done and everyone and everything in place, it’s now almost time for liftoff.

Click here to view the interactive media kit to learn more about the launch.

Join the conversation online with the hashtags #Sentinel6 and #SpaceCare