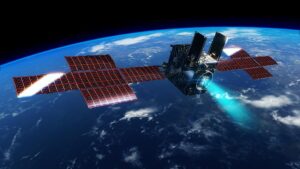 COLOGNE, Germany — The German Aerospace Center, DLR, has partnered with the Japan Aerospace Exploration Agency (JAXA) on a planned low-cost asteroid mission called Destiny+, expected to launch toward the asteroid 3200 Phaethon in 2024.

DLR will build the Destiny Dust Analyzer instrument, which will measure the properties of cosmic dust during the spacecraft’s four-year cruise and its flyby of the 5.8-kilometer asteroid.

The spacecraft will test innovative technologies that JAXA hopes to utilize in its future deep space exploration missions.

DLR, which signed the contract for the mission with JAXA on Nov. 11 during an online joint strategy dialogue meeting, will fund the development of the dust analyzer, which will be built by the Institute of Space Systems at the University of Stuttgart.

JAXA is responsible for funding the mission, including its launch aboard Japan’s Epsilon rocket.

Germany is the biggest contributor to the European Space Agency’s budget, but also has its own space program with international partnerships. During the online bilateral meeting, DLR and JAXA discussed more than 60 joint projects. The two have a comprehensive joint strategy agreement dating back to 2016.

Solar system exploration is a key theme of this cooperation, according to DLR. Together with the French space agency CNES, DLR built the MASCOT lander, part of JAXA’s Hayabusa2 mission, which touched down on asteroid Ryugu in October 2018. In the future, DLR and JAXA will work together on the Martian Moon Exploration mission (MMX), a medium-class mission set for launch in 2024, which will explore the Martian moons Phobos and Deimos.

The Destiny+ mission, previously expected to launch in 2022, will also carry two sets of cameras that will explore the surface of 3200 Phaethon during the 2026 flyby. A multispectral camera will image the asteroid at different wavelengths, while a telescoping camera with a rotating mirror will track the asteroid during the flyby.

“The two cameras will only make measurements during the few hours and days around the flyby,” said Henselowsky. “The Dust Analyzer, on the other hand, will start measuring the properties of the cosmic dust already a couple of months after launch and will remain operational throughout the four-year cruise.”

“During its flyby the spacecraft will approach the asteroid down to a distance of approximately 500 kilometers,” Henselowsky added. “The scientific aim of the mission is to investigate whether the cosmic dust particles released from the asteroid may have played a role in the creation of life on our planet.”