Astroscale Holdings Inc. ("Astroscale"), the market-leader in securing long-term orbital sustainability, has announced that its End-of-Life Services by Astroscale-demonstration (ELSA-d) mission will launch on a Soyuz rocket operated by GK Launch Services from Baikonur Cosmodrome, Kazakhstan, in March 2021. "We now have the launch in our sights," says Seita Iizuka, ELSA-d Project Manager. "

Astroscale Holdings Inc. ("Astroscale"), the market-leader in securing long-term orbital sustainability, has announced that its End-of-Life Services by Astroscale-demonstration (ELSA-d) mission will launch on a Soyuz rocket operated by GK Launch Services from Baikonur Cosmodrome, Kazakhstan, in March 2021.

"We now have the launch in our sights," says Seita Iizuka, ELSA-d Project Manager. "Publicly announcing this significant milestone is possible thanks to years of teamwork. The ELSA-d program demonstrates complex and innovative capabilities that will support satellite operators in realizing options for their post-mission disposal strategies and establish Astroscale as a global leader in the on-orbit servicing market."

Decreased launch and satellite development costs, an increasing global dependence on data from space and the rise of large commercial satellite constellations have led to a rapidly increasing population of objects in low Earth orbit (LEO). This growing use of space brings significant benefits to society but also greatly increases the threat of collision or break-up.

This growing potential for additional debris creation endangers current and future satellite missions and puts society's reliance on data from space at risk. ELSA-d will demonstrate a valuable service by safely removing defunct satellites from orbit to maintain the viability of LEO.

The ELSA-d mission will demonstrate multiple dynamically complex capture activities necessary to remove defunct objects from orbit using an innovative approach consisting of a servicer (~175kg) and a client (~17kg), launched together.

The servicer, equipped with proximity rendezvous technologies and a magnetic capture mechanism, will repeatedly release and dock with the client, which has been prepared with a ferromagnetic docking plate. Astroscale intends to prove the capabilities required for debris removal, including client search, inspection and rendezvous, and both non-tumbling and tumbling docking.

Astroscale will operate ELSA-d out of the UK using the In-Orbit Servicing Control Centre National Facility (IOCC) developed by a team led by Astroscale. The IOCC, located at the Satellite Applications Catapult in Harwell, Oxfordshire, was developed specifically for satellite servicing missions. "Astroscale UK is proud to be operating this exciting mission," says John Auburn, Managing Director of Astroscale's UK office.

"ELSA-d will be groundbreaking in so many ways - it will demonstrate the first semi-autonomous capture of a non-responsive, tumbling client, as well as the first identification of a client located outside the servicer's sensor field of view."

While ELSA-d will most notably demonstrate the technical capabilities needed for orbital debris removal, the mission also highlights Astroscale's efforts to drive the global conversation on policies and the business cases behind the on-orbit servicing ecosystem. With a space segment developed in Japan, a ground segment in the UK, launch from Kazakhstan, ground station support in multiple countries, and a team that spans five countries, Astroscale epitomizes international collaboration.

Additionally, the company's global supply chain and discussions with a growing list of potential customers are evidence of the commercial viability of this part of the space economy.

"Our passionate and dedicated global team is excited to get closer to the launch of ELSA-d," says Nobu Okada, Founder and CEO of Astroscale. "We're on the brink of a new chapter in on-orbit servicing, and Astroscale is eager to take this important next step in demonstrating technical innovation, advancing the discussion on international policies and proving the business case."

Astroscale's future missions include Phase I of the Japan Aerospace Exploration Agency's Commercial Removal of Debris Demonstration (CRD2) project, scheduled to launch in early 2023, as well as the company's first satellite life-extension platform in geostationary orbit. 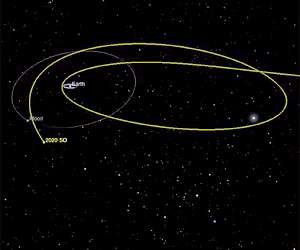 Earth may have recaptured a 1960s-era rocket booster
Pasadena CA (JPL) Nov 13, 2020
Earth has captured a tiny object from its orbit around the Sun and will keep it as a temporary satellite for a few months before it escapes back to a solar orbit. But the object is likely not an asteroid; it's probably the Centaur upper stage rocket booster that helped lift NASA's ill-fated Surveyor 2 spacecraft toward the Moon in 1966. This story of celestial catch-and-release begins with the detection of an unknown object by the NASA-funded Pan-STARRS1 survey telescope on Maui in September. Astr ... read more