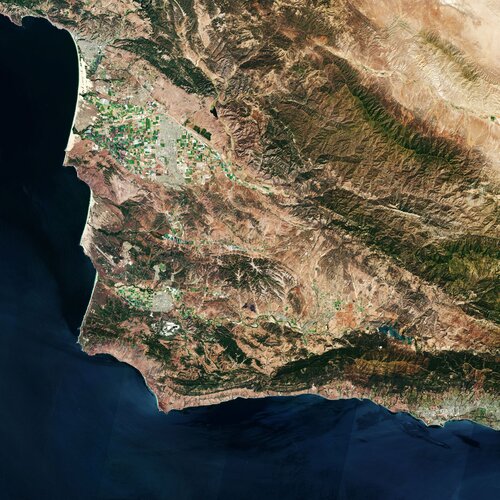 Zoom in to see this image at its full 10 m resolution.

The area pictured here shows the Santa Barbara County in the southern region of the US state of California. Located around 200 km northwest of Los Angeles, the county spans across 7000 sq km and is bordered by the Pacific Ocean to the west and south.

The county includes the coastal city of Santa Barbara, partially visible in the lower right of the image. Santa Barbara lies between the steeply rising Santa Ynez Mountains, visible in dark green directly above, and the Pacific Ocean. The mountains rise dramatically behind the city with several peaks exceeding 1200 m.

Other mountain ranges in the county include the San Rafael Mountains, visible directly above, and the Sierra Madre Mountains. Most of the mountainous area is within the Los Padres National Forest – California’s second largest national forest.

The county’s most populous city is Santa Maria, visible in the top left of the image, surrounded by a patchwork of agricultural plots. Like many other cities in California, Santa Maria experiences a Mediterranean climate.

Below Santa Maria lies the Vandenberg Air Force Base – visible along the coast. It is here, where the Copernicus Sentinel-6 Michael Freilich satellite will launch from. A joint European-US satellite built to monitor sea levels, the satellite will liftoff atop a Space X Falcon 9 rocket on 21 November at 18:17 CET (09:17 PST). The satellite, named after Michael Freilich, the former NASA director who advocated for advancing satellite measurements, will extend a nearly 30-year continuous dataset on sea level.

It will be the first ESA-developed satellite to be given a ride into space on the SpaceX Falcon 9 rocket. Famously, Falcon 9 is partially reusable – unlike most rockets which are expendable launch systems. Once in orbit some 1336 km above Earth, the Sentinel-6 Michael Freilich satellite will collect sea level measurements for 95% of Earth’s ice-free oceans. The data will be essential for climate science, policy-making and protecting those in low-lying regions.

This image, captured on 14 August 2020, is also featured on the Earth from Space video programme.