I am Artemis: Alabama Native Shoots for the Moon with NASA Career

Hailing from Decatur, Alabama, Johnny Heflin, recently celebrated his 30th anniversary working with NASA, where he serves as the Space Launch System (SLS) liquid engines manager, at Marshall Space Flight Center in Huntsville, Alabama. He oversees a team developing and testing the RS-25 and RL10 engines that will provide the power to send astronauts to the Moon on future Artemis missions. "

Hailing from Decatur, Alabama, Johnny Heflin, recently celebrated his 30th anniversary working with NASA, where he serves as the Space Launch System (SLS) liquid engines manager, at Marshall Space Flight Center in Huntsville, Alabama. He oversees a team developing and testing the RS-25 and RL10 engines that will provide the power to send astronauts to the Moon on future Artemis missions.

"My team will deliver high-performance engines to safely fly humans to the Moon," Heflin said. "We take both the launch and in-space engines that power the Space Launch System rocket from design and manufacturing, through testing and flight to the Moon," he noted.

What inspired this small-town boy from just outside Decatur, Alabama, to become an aerospace engineer? According to Heflin, this was a journey shaped by inspiration, hard work and a lucky break.

"I was not one of those kids who grew up knowing what they wanted to do in life. There was no 12-step plan on how I was going to achieve my ultimate dream job, and there was never that one thing that I felt I was born to do," said Heflin.

After high school, Heflin worked in construction, and other various jobs, before realizing he wanted something different. "I enjoyed seeing the results of hard work, but I knew it was not my forever job," noted Heflin.

Growing up, he remembers his mother, who he describes as his biggest mentor in life, worked a long day on an assembly line at the Huntsville Chrysler factory and then came home to make dinner and care for her four children.

"That's when I heard her speak admirably about the engineers there at Chrysler. So, I pursued electrical engineering solely based on the impression I had formed listening to her talk about it," commented Heflin.

Inspired by his mother's talks and strong work ethic, Heflin attended an electrical engineering workshop during a career day at The University of Alabama-Huntsville (UAH). While studying there, Heflin received what he calls a "lucky phone call" that allowed him to join Marshall through the cooperative education program.

After graduating from UAH with a degree in Electrical Engineering in 1992, Heflin began a full-time position at Marshall.

He began his career in the rocket propulsion test lab where he tested rocket engines and components that powered the space shuttle, a job he described as an extraordinary opportunity for young engineers.

Apart from testing rocket engines that put humans in space, he learned a lot about the profession and worked with mentors who later called upon him for greater roles on the shuttle program. He eventually served as the shuttle main engine avionics manager and team lead of the design engineering office.

One of Heflin's fondest memories from the shuttle program was during a nighttime launch at Kennedy Space Center in Florida.

"I watched the astronauts drive away in a van to board the shuttle and as they disappeared in the darkness that's when it hit me that I had a huge role in building and managing the engines that would fly that crew to space and return them back home to their families," Heflin commented with pride.

In 2011, when the shuttle program ended, Heflin joined the SLS liquid engine office he now leads. Under his direction, the former RS-25 shuttle engines have been adapted and tested to fly on the SLS rocket that will launch astronauts on missions to the Moon.

Along with testing the modified RS-25s and the RL10s for the next chapter in human exploration, Heflin's team is focused on one of the most important SLS milestones to date: the Green Run testing that will verify the rocket's design and propulsion systems, including the first four RS-25 engines to fly the SLS on its first lunar mission.

"After this hot-fire test, we're one step closer to landing the next Americans on the lunar surface. I'm humbled to be on a team that made this possible. Being part of putting a NASA rocket back in space, will be an absolute pinnacle in my career," said Heflin.

NASA is working to land the first woman and next man on the Moon by 2024. The SLS rocket, Orion spacecraft, Gateway, and human landing system are part of NASA's backbone for deep space exploration. The Artemis program is the next step in human space exploration. It's a component of America's broader Moon to Mars exploration approach, in which astronauts will explore the Moon and gain experience to enable humanity's next giant leap: sending humans to Mars. SLS is the only rocket that can send Orion, astronauts and supplies to the Moon in a single mission. 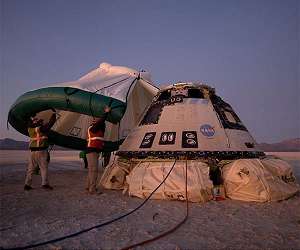 NASA-Boeing procurement bid under investigation: report
Washington (AFP) Nov 17, 2020
NASA's inspector general and the US justice department have launched investigations into allegations that Boeing may have benefited from internal information provided by the space agency during a contract bidding process, the Washington Post reported Tuesday. The affair led to the abrupt resignation of Doug Loverro, then the head of NASA's human exploration directorate, in May. At the time, it was known that his departure was linked to a procurement process, but the details weren't clear. Ac ... read more