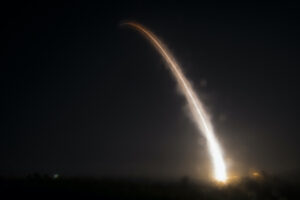 WASHINGTON — A group of progressive and anti-war organizations in a memo to President-elect Joe Biden’s transition team ask the incoming administration to make deep cuts to military budgets, and specifically target the U.S.

The contents of the memo were first reported on Monday by Politico. A copy of the memo was obtained by SpaceNews.

Among the key demands in the memo are to restrict the hiring of defense industry executives for top DoD posts, reduce the number of support contractors in the Pentagon, and eliminate the so-called “overseas contingency operations” account used to fund expenses outside the normal budget process.

The groups call for the elimination of the U.S. Space Force, the ground-based strategic deterrent (GBSD) and cuts to missile defense programs.

The GBSD is a U.S. Air Force program to develop the next-generation intercontinental ballistic missile to replace the Minuteman 3. ICBMs are the ground-based portion of the U.S. strategic nuclear triad that also includes submarines and bombers.

The memo calls the Space Force an “unnecessary bureaucracy that costs $16 billion in 2021” and is focused on “militarization rather than cooperation in space.”

The $16 billion budget for the Space Force was carved out of the Air Force’s budget and transferred to the new service.

Experts have pointed out that Biden or any president could not eliminate the Space Force by executive order. Congress enacted the Space Force in the 2020 National Defense Authorization Act and its status as the sixth branch of the armed forces is cemented in law.

Sarah Mineiro, a former staff member of the House Armed Service Committee’s strategic forces subcommittee, said the progressive groups’ demands are impractical and ignore the fact that the Space Force, GBSD and missile defense have bipartisan support on Capitol Hill.

Mineiro, an adjunct senior fellow at the Center for a New American Security, was closely involved in the drafting of the Space Force and Space Command legislation. She noted that the Space Force passed the House floor in a Democratic-led majority NDAA. “Support for Space Force has been both bipartisan and bicameral and is unlikely to be eroded by the demands of this group of progressives,” she told SpaceNews.

“Surely the Biden administration will have more pressing legislative priorities than this in the context of COVID, the economy, and domestic priorities,” said Mineiro.

Demands to institute deep defense cuts, prohibitions on defense industry personnel filling DoD leadership spots and the cancellation of GBSD are part of the “obligatory wish list,” she said. “Necessary public messaging but impractical for implementation.”