JILA researchers have used a state-of-the-art atomic clock to narrow the search for elusive dark matter, an example of how continual improvements in clocks have value beyond timekeeping. Older atomic clocks operating at microwave frequencies have hunted for dark matter before, but this is the first time a newer clock, operating at higher optical frequencies, and an ultra-stable oscillator

JILA researchers have used a state-of-the-art atomic clock to narrow the search for elusive dark matter, an example of how continual improvements in clocks have value beyond timekeeping.

Older atomic clocks operating at microwave frequencies have hunted for dark matter before, but this is the first time a newer clock, operating at higher optical frequencies, and an ultra-stable oscillator to ensure steady light waves, have been harnessed to set more precise bounds on the search. The research is described in Physical Review Letters .

Astrophysical observations show that dark matter makes up most of the "stuff" in the universe but so far it has eluded capture. Researchers around the world have been looking for it in various forms. The JILA team focused on ultralight dark matter, which in theory has a teeny mass (much less than a single electron) and a humongous wavelength - how far a particle spreads in space - that could be as large as the size of dwarf galaxies. This type of dark matter would be bound by gravity to galaxies and thus to ordinary matter.

Ultralight dark matter is expected to create tiny fluctuations in two fundamental physical "constants": the electron's mass, and the fine-structure constant. The JILA team used a strontium lattice clock and a hydrogen maser (a microwave version of a laser) to compare their well-known optical and microwave frequencies, respectively, to the frequency of light resonating in an ultra-stable cavity made from a single crystal of pure silicon.

The resulting frequency ratios are sensitive to variations over time in both constants. The relative fluctuations of the ratios and constants can be used as sensors to connect cosmological models of dark matter to accepted physics theories.

The JILA team established new limits on a floor for "normal" fluctuations, beyond which any unusual signals discovered later might be due to dark matter. The researchers constrained the coupling strength of ultralight dark matter to the electron mass and the fine-structure constant to be on the order of 10-5 (1 in 100,000) or less, the most precise measurement ever of this value.

JILA is jointly operated by the National Institute of Standards and Technology (NIST) and the University of Colorado Boulder.

"Nobody actually knows at what sensitivity level you will start to see dark matter in laboratory measurements," NIST/JILA Fellow Jun Ye said. "The problem is that physics as we know it is not quite complete at this point. We know something is missing but we don't quite know how to fix it yet."

"We know dark matter exists from astrophysical observations, but we don't know how the dark matter connects to ordinary matter and the values we measure," Ye added. "Experiments like ours allow us to test various theory models people put together to try to explore the nature of dark matter. By setting better and better bounds, we hope to rule out some incorrect theory models and eventually make a discovery in the future."

Scientists are not sure whether dark matter consists of particles or oscillating fields affecting local environments, Ye noted. The JILA experiments are intended to detect dark matter's "pulling" effect on ordinary matter and electromagnetic fields, he said.

Atomic clocks are prime probes for dark matter because they can detect changes in fundamental constants and are rapidly improving in precision, stability and reliability. The cavity's stability was also a crucial factor in the new measurements.

The resonant frequency of light in the cavity depends on the length of the cavity, which can be traced back to the Bohr radius (a physical constant equal to the distance between the nucleus and the electron in a hydrogen atom). The Bohr radius is also related to the values of the fine structure constant and electron mass. Therefore, changes in the resonant frequency as compared to transition frequencies in atoms can indicate fluctuations in these constants caused by dark matter.

Researchers collected data on the strontium/cavity frequency ratio for 12 days with the clock running 30% of the time, resulting in a data set 978,041 seconds long. The hydrogen maser data spanned 33 days with the maser running 94% of the time, resulting in a 2,826,942-second record. The hydrogen/cavity frequency ratio provided useful sensitivity to the electron mass although the maser was less stable and produced noisier signals than the strontium clock.

JILA researchers collected the dark matter search data during their recent demonstration of an improved time scale - a system that incorporates data from multiple atomic clocks to produce a single, highly accurate timekeeping signal for distribution. As the performance of atomic clocks, optical cavities and time scales improves in the future, the frequency ratios can be re-examined with ever-higher resolution, further extending the reach of dark matter searches.

"Any time one is running an optical atomic time scale, there is a chance to set a new bound on or make a discovery of dark matter," Ye said. "In the future, when we can put these new systems in orbit, it will be the biggest 'telescope' ever built for the search for dark matter." 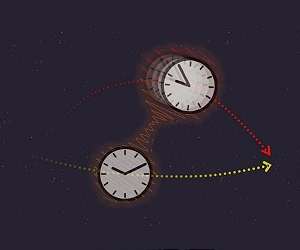 Timekeeping theory combines quantum clocks and Einstein's relativity
Hanover NH (SPX) Oct 27, 2020
A phenomenon of quantum mechanics known as superposition can impact timekeeping in high-precision clocks, according to a theoretical study from Dartmouth College, Saint Anselm College and Santa Clara University. Research describing the effect shows that superposition--the ability of an atom to exist in more than one state at the same time--leads to a correction in atomic clocks known as "quantum time dilation." The research, published in the journal Nature Communications, takes into account ... read more