As ACE systems are able to generate more than 6 kilometers per second of delta-V, Sherpa-LTE now has the capability to deliver customers to GEO, Cislunar, or Earth-escape orbits. Sherpa-LTE provides a low-cost alternative to purchasing full direct-inject launch vehicles and will extend the ability of small launch vehicles that are currently under development to reach beyond low Earth orbit. The Sherpa-LTE is targeted to fly mid-2021.

Apollo CEO Mike Cassidy noted, "We're thrilled to partner with Spaceflight Inc. to provide the significant delta-V required for Sherpa-LTE to deliver Spaceflight Inc. customers to their final orbits in LEO, GEO, and beyond."

"We have a successful track record of developing and deploying spacecraft from in-space vehicles," added Curt Blake, president and CEO of Spaceflight. "And we're delighted to have Apollo's high-performance propulsion system onboard to help our customers reach their target orbits efficiently and reliably."

Apollo Fusion, Inc. designs and builds state of the art Hall thruster propulsion systems for a variety of government and commercial satellite programs. The Apollo team members have extremely deep aerospace experience and over the course of their careers have designed and built systems that are flying on over 1,000 satellites that are in orbit today.

Apollo has built up the capacity to deliver dozens of propulsion systems every month to meet current high market demand. Apollo has raised nearly $25 million in funding. Apollo's founder and CEO is Mike Cassidy. Mike is a serial entrepreneur with four previous successful startups. Mike was previously a Vice President at Google where he led Project Loon, a high-altitude telecommunications system. 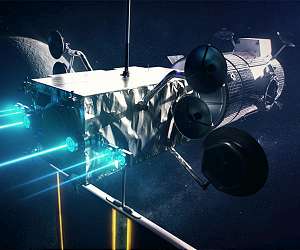 The Propulsion We're Supplying, It's Electrifying
Cleveland OH (SPX) Oct 23, 2020
Since the beginning of the space program, people have been captivated by big, powerful rockets-like NASA's Saturn V rocket that sent Apollo to the lunar surface, or the Space Launch System that will produce millions of pounds of thrust as it sends Artemis astronauts back to the Moon. But what if the most powerful propulsion system in NASA's toolbox produces less than one pound of thrust while reaching speeds of up to 200,000 mph? What if it costs less, carries more, and uses less fuel? This ... read more