A main cable that supports Arecibo Observatory in Puerto Rico broke over the weekend, compounding damage caused by a smaller cable failure in August, according to the University of Central Florida in Orlando, which manages the facility. "It broke and fell onto the reflector dish below, causing additional damage to the dish and other nearby cables," the university said in a statement about

A main cable that supports Arecibo Observatory in Puerto Rico broke over the weekend, compounding damage caused by a smaller cable failure in August, according to the University of Central Florida in Orlando, which manages the facility.

"It broke and fell onto the reflector dish below, causing additional damage to the dish and other nearby cables," the university said in a statement about the incident Friday evening. "No one was hurt, and engineers are already working to determine the best way to stabilize the structure," the statement said.

Few additional details and no new photos were available Sunday because the facility restricted access to the area around the 18-acre dish, the university said.

UCF submitted a request recently to the National Science Foundation for $10.5 million to begin repairs on the August damage. That work would include buying at least six massive cables, which range in thickness from 3 inches to 6 inches.

The cables support a six-story structure and platform suspended above the dish, which houses the world's most powerful radio telescope transmitter and other instruments. When functioning properly, the observatory can beam radio waves at asteroids and other space objects, obtaining images and data as the waves bounce back to Earth.

Among the vital science conducted at the facility is the tracking of near-Earth objects - comets or asteroids that could collide with Earth and destroy large regions.

Engineers at the site had determined the August failure resulted from a 3-inch cable slipping out of a socket on a support tower. But the university's statement on Friday's mishap said it did not slip from a socket, but rather broke - mostly likely because of increased stress due to the previous failure.

"The team hopes to be able to reduce the tension in the existing cables at the tower and install steel reinforcements to temporarily alleviate some of the additional load that is being distributed among the remaining cables," the university said.

Two new cables on order would be rushed to the site, if possible, according to UCF's statement.


Related Links
Arecibo Observatory
Stellar Chemistry, The Universe And All Within It 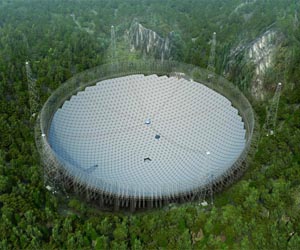 FAST reveals mystery of fast radio bursts from the universe
Beijing, China (SPX) Nov 05, 2020
In the vast universe, some extremely strong radio waves occasionally blink, with duration of only milliseconds. Such fast radio bursts were discovered by astronomers in 2007. Puzzling questions arise: Who sent them? What information is conveyed by these radio bursts? The Five-hundred-meter Aperture Spherical Radio Telescope (FAST) has revealed some mystery of the fast radio bursts, according to a study published in Nature on Oct. 28. More than 30 burst sources have been found until last year ... read more