Astronauts prepare for most crowded space station in years

Four astronauts who plan to head to the International Space Station on Saturday from Florida say they anticipate the expansion of science and other activities on the orbiting platform. Their arrival at the space station would boost the number of astronauts who live there to seven for the first time in years. Saturday's launch will be the first time four astronauts fly in a space capsule, a

Four astronauts who plan to head to the International Space Station on Saturday from Florida say they anticipate the expansion of science and other activities on the orbiting platform.

Their arrival at the space station would boost the number of astronauts who live there to seven for the first time in years. Saturday's launch will be the first time four astronauts fly in a space capsule, and the first routine launch in NASA's new commercial spaceflight program.

"It's gonna be exciting to see how much work we're gonna be able to get done while we're there," Hopkins said Monday at Kennedy Space Center, from which the launch will occur. "There's not a lot of gray space on [the schedule], so I think they're gonna keep us pretty busy."

The space station only has six sleeping stations, so Hopkins said he plans to sleep in the Crew Dragon capsule, named Resilience. During the space shuttle era, commanders traditionally slept in the cockpit of that craft, he said.

Liftoff of the SpaceX Falcon 9 rocket with the capsule - also built by Elon Musk's SpaceX - is planned for 7:49 p.m. EST on Saturday to begin the Crew-1 mission, but Tropical Storm Eta's impact on Florida could delay that launch time, the astronauts said.

Hopkins, 51, will fly with pilot Victor Glover, 44, and mission specialists Shannon Walker and Soichi Noguchi, both 55. Noguchi is a Japanese astronaut.

Glover is flying into space for the first time. He declined to speculate what kind of world he thinks he'll be returning to given the pending change of leadership in Washington, D.C.

"Unlike the election, you know that's in the past or at least is receding into the past, whereas this mission is still ahead of me, so let's get there and then we'll talk," Glover said.

He said the crew was enjoying getting ready.

If the crew lifts off on time, it will have a relatively short flight to the space station of about 8 1/2 hours. If there is a delay on the ground, that could stretch into 24 hours or more.

Since the flight will be the first time four people ride in a Dragon capsule, they will spend some of their time packing and unpacking cargo and personal supplies, Walker said.

The crew will test certain procedures, even if the short flight doesn't require them, so future crews know what to expect, she said.

"It's the choreography of managing all your stuff, for example when you have to get out of your spacesuit and into your regular clothes," Walker said. "Getting everything put away in your spaces ... can be difficult."

Walker flew in a Russian Soyuz capsule in 2010 to the space station. She said Dragon's crew seating area feels roomier than Soyuz, but the Russian spacecraft can carry a lot of cargo along with people.

SpaceX has said in the past that Dragon could be configured to carry seven astronauts, but Walker said it would seem to her that seven people wouldn't allow for much space to move around.

"There'd be room for them but no room for cargo," she said.

The previous crewed SpaceX capsule, which returned to Earth on Aug. 2, was a test flight that carried two astronauts to the space station and spent two months docked to it in orbit.

Besides that mission, astronauts have been launched into space only aboard the Russian Soyuz capsule that carries two or three people from Kazakhstan since the end of the space shuttle program in 2011.

Hopkins said he didn't think astronauts Bob Behnken and Doug Hurley - the previous Dragon mission crew members - would attend the upcoming launch due to pandemic restrictions at the space center.

But he said the two astronauts had offered advice on events and sounds the crew should expect during liftoff and landing.

"And I will say that my personal favorite [advice] was to think about how we were going to pack our food, so we actually rearranged our food to make sure that it was easy to access," Hopkins said. 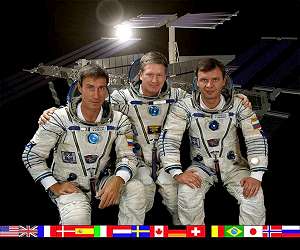 The International Space Station at 20 offers hope and a template for future cooperation
Montgomery AL (The Conversation) Nov 06, 2020
On Nov. 2, 2020, the International Space Station celebrated its 20th anniversary of continuous human occupation. With astronauts and cosmonauts from around the world working together, the ISS has demonstrated humankind's ability to not only live and work in space but cooperate with one another. This remarkable achievement is significant as countries and companies around the world look to expand space exploration beyond Earth orbit. The path to this anniversary was not easy; like most things done i ... read more