A new world of warcraft

In the past decade, high tech tools have proliferated in the world's fighting forces. At least 80 nations can now deploy remote-controlled drones. Will the widespread use of digitally enhanced arsenals prove a destabilizing, if not destructive, element in the complex struggles among states? Not necessarily, argues assistant professor of political science Erik Lin-Greenberg '09, SM '09. "

In the past decade, high tech tools have proliferated in the world's fighting forces. At least 80 nations can now deploy remote-controlled drones. Will the widespread use of digitally enhanced arsenals prove a destabilizing, if not destructive, element in the complex struggles among states? Not necessarily, argues assistant professor of political science Erik Lin-Greenberg '09, SM '09.

"I've learned that in some circumstances, remote war-fighting technologies such as drones can lead to a ratcheting down of tensions, and that it might even serve strategically as a way to de-escalate global crises," he says.

Lin-Greenberg, who joined MIT in July, is investigating how new technologies affect military decision-making and the use of force. He wants to understand, for instance, whether allies employing different technologies face obstacles working together, or if the high-speed tempo of military operations executed by artificial intelligence might prove challenging to officers accustomed to making decisions in longer time frames. Pinning down answers to these questions is a matter of some urgency.

"Given the massive amount of technological innovation under way, it's clear that this is the direction war is moving," says Lin-Greenberg. "I'm trying to figure out how the systems that are becoming dominant will shape both interactions between states and their leaders' decisions - factors that may determine whether there's war or peace."

Managing intelligence
The impetus for Lin-Greenberg's scholarly inquiry came from his own experiences as an active duty U.S. Air Force officer, when he was engaged in a series of critical military intelligence roles. He was, for instance, responsible for the deployment of intelligence assets and personnel in Kandahar, Afghanistan. He also led a team of analysts providing real-time support to national agencies and coalition combat forces during surveillance and reconnaissance operations, and, as a political-military affairs analyst, provided intelligence insights to senior Air Force leaders. And today, as a major in the Air Force Reserve, Lin-Greenberg supports strategy and policy work at the Joint Staff, the headquarters team of the Pentagon.

On his first active duty assignment, after nine months of intelligence training, Lin-Greenberg was at a ground station supporting remotely piloted drone sorties. "It was really the height of operations in Afghanistan, before troop withdrawal," he recalls. "We carried out 50 to 60 combat air patrols of remote aircraft to surveil and execute airstrikes - drones were seen as an easy fix to everything."

But while these remotely piloted drones performed effectively in uncontested airspace in Afghanistan, Lin-Greenberg began thinking about how they might function in other contexts. "I wondered how we would respond when a more advanced adversary shot one of them down," he recalls. "I wanted to know what these new systems meant for the future of warfare after Afghanistan."

These big-picture questions increasingly preoccupied Lin-Greenberg as he progressed up the ladder in intelligence work. "When I sat in meetings discussing AI and big data, people didn't always comprehend how these technologies played out in an operational setting," he says. "This motivated my research as an academic."

From battlefield to classroom
Lin-Greenberg's fascination for these topics was deep enough that he left active duty in order to study political science at Columbia University. There, he turned his attention to the ways in which remotely operated weapons systems alter the risk calculus in military operations.

"Political science theory suggested that all these tools that make it easier to harm the enemy without putting your own troops in the line of fire would make offensive actions easier," says Lin-Greenberg. But his research has revealed some contrary evidence.

In June 2019, for example, when Iran sought to signal its displeasure with U.S. activity in the Persian Gulf, it shot down an unpiloted drone rather than a piloted reconnaissance aircraft. In response, the Trump administration announced that there would be no lethal retaliation, since no U.S. lives were lost. In a piece for Foreign Policy describing this and similar episodes, Lin-Greenberg argued that use of pilotless weapons might create "zones of escalation" that avoid riskier, more destructive conflict. "They might actually have a stabilizing effect," he says.

Lin-Greenberg bolsters his research, often constructed as case studies, with observational data from archives, and with the use of innovative war-gaming techniques. In a recent project, for instance, he created a simulation where military officers participating in the game responded either to the shoot-down of a drone or an attack by an adversary. As research assistants jotted down notes in real time, these military personnel revealed what they might actually do given the different scenarios.

With regional antagonists such as Pakistan and India building up their technological capabilities in uncrewed weaponry, threatening to ignite larger conflicts, Lin-Greenberg hopes to get his insights about the use of such systems in front of policymakers on a timely basis. In addition to his Joint Staff advising, he writes regularly for the foreign policy-based web platform War on the Rocks and for a variety of journals. He also has a book project in progress, "Remote Controlled Escalation: Drones, Cyber Warfare, and Interstate Crises," which is based on his dissertation.

Transformed by 9/11
His deep commitment to national defense, as both a scholar and service member, was triggered by the 9/11 attacks. A first-year student in a New Jersey town right outside of New York, Lin-Greenberg watched fighter jets buzzing overhead. "Walking home that day, the world seemed uncertain, but I looked up and felt at least some degree of safety - folks were trying to defend the country."

Soon he began exploring military careers, and settled on the Air Force, gravitating toward the intelligence branches: "Maybe I watched too many James Bond movies in high school, but I definitely read a lot about the Cold War and history," says Lin-Greenberg. But rather than attend a service academy, he chose MIT, under the Air Force ROTC program.

A political science major, Lin-Greenberg credits classes with such professors as Stephen Van Evera, Fotini Christia, Barry Posen, and M. Taylor Fravel for giving him a grounding in security studies, U.S. and Chinese foreign policy, and regional conflicts, which provided an essential intellectual foundation for his military career.

Now back at MIT and teaching with his former mentors, Lin-Greenberg says he is "humbled, excited, and a bit intimidated." This fall, he is teaching the graduate class 17.432 (Causes of War), drawing in part on his own military history, while pursuing new research avenues. One area of interest: developing international agreements on the use of AI, similar to the law of the sea and law of war. "Having guidelines on automated systems, a set of best practices, would be incredibly useful to decrease inadvertent escalations, and to tell states how to interact when something goes awry," he says.

Although his return to Cambridge, Massachusetts, comes in the midst of a pandemic, Lin-Greenberg has managed to rediscover old and beloved haunts, as he settles in to remote teaching and research. "I did a Mike's Pastry run days after I got here, and I am gorging myself on food in the North End," he says. 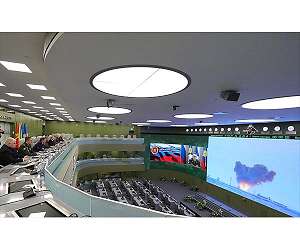 Putin: Russia prioritising increasing space satellite group and building advanced satellites
Moscow (Sputnik) Nov 03, 2020
A meeting on the development of the space industry is taking place in Moscow on 2 November, with one of the key areas under discussion being the country's space missions, Kremlin spokesman Dmitry Peskov said. Russia's priorities in the space industry are to increase the orbital satellite group, build advanced satellites, and more innovative rockets, President Vladimir Putin has said at a meeting on financing and development of the space industry. According to Putin, the country's main priori ... read more