After years of detective work, scientists working on the European Space Agency (ESA) Rosetta mission have now been able to locate where the Philae lander made its second and penultimate contact with the surface of Comet 67P/Churyumov-Gerasimenko on 12 November 2014, before finally coming to a halt 30 metres away. This landing was monitored from the German Aerospace Center Philae Control Ce

After years of detective work, scientists working on the European Space Agency (ESA) Rosetta mission have now been able to locate where the Philae lander made its second and penultimate contact with the surface of Comet 67P/Churyumov-Gerasimenko on 12 November 2014, before finally coming to a halt 30 metres away.

This landing was monitored from the German Aerospace Center Philae Control Center. Philae left traces behind; the lander pressed its top side and the housing of its sample drill into an icy crevice in a black rocky area covered with carbonaceous dust. As a result, Philae scratched open the surface, exposing ice from when the comet was formed that had been protected from the Sun's radiation ever since. The bare, bright icy surface, the outline of which is somewhat reminiscent of a skull, has now revealed the contact point, researchers write in the scientific publication Nature.

"Now we finally know the exact place where Philae touched down on the comet for the second time. This will allow us to fully reconstruct the lander's trajectory and derive important scientific results from the telemetry data as well as measurements from some of the instruments operating during the landing process," explains Jean-Baptiste Vincent from the DLR Institute of Planetary Research, who was involved in the research published this week.

"Philae had left us with one final mystery waiting to be solved," says ESA's Laurence O'Rourke, the lead author of the study. The team of scientists were motivated to carry out a multi-year search for 'TD2,' touchdown point two: "It was important to find the touchdown site because sensors on Philae indicated that it had dug into the surface, most likely exposing the primitive ice hidden underneath." Over the past few years, the location was searched for like a needle in a haystack in the numerous images and data from Philae's landing area.

The Magnetometer Gave the Decisive Indication
For a long time and to no avail, the scientists repeatedly searched for spots of bare ice in the suspected region using high-resolution images acquired by the Optical, Spectroscopic and Infrared Remote Imaging System (OSIRIS) instrument developed by the Max Planck Institute for Solar System Research (MPS) in Gottingen and carried on board the Rosetta orbiter. But it was the evaluation of measurements made by the ROsetta MAgnetometer and Plasma monitor (ROMAP), built for Philae under the direction of the Technical University of Braunschweig, that put the scientists on the right track.

In the data, the team investigated changes that occurred when the magnetometer boom, projecting 48 centimetres from the lander, moved when it hit the surface - which showed that it had bent. This created a characteristic pattern in the data from Philae's ROMAP instrument, which showed that the boom moved relative to Philae and allowed the duration of the lander's penetration of the ice to be estimated. The ROMAP data were correlated with data from Rosetta's RPC magnetometer to determine Philae's exact orientation.

Analysis of the data revealed that Philae had spent almost two full minutes - not unusual in this very low gravity environment - at the second surface contact point, making at least four different surface contacts as the lander 'ploughed' through the rugged landscape. A particularly remarkable imprint, which became visible in the images, was made when the top of Philae sank 25 centimetres into the ice at the side of an open crevice, leaving visible traces of the sample drill and the lander's top. The peaks in the magnetic field data resulting from the boom movement show that Philae took three seconds to make this particular 'dent.'

A Sculpture of Bare Comet Ice in the Shape of a Skull
The ROMAP data supported the discovery of this site with the ice-filled, bright open crevice in the OSIRIS images. When viewed from above, it reminded the researchers of a skull, so they named the contact point 'Skull-top Ridge.' The right 'eye' of the skull was formed where Philae's top side compressed the comet dust, while Philae scratched through the gap between the dust-covered ice blocks like a windmill, only to finally lift off again and cover the last few metres to its final resting place.

"At the time the data showed that Philae had made contact with the surface several times and finally landed in a poorly lit spot. We also knew the approximate final landing site from CONSERT radar measurements. However, Philae's exact trajectory and points of contact could not be interpreted so quickly," recalls Philae Project Manager Stephan Ulamec from DLR.

The evaluation of the OSIRIS images together with those acquired by the Visible and InfraRed Thermal Imaging Spectrometer (VIRTIS) instrument confirmed that the bright material is pure water ice, which was exposed by the Philae surface contact over an area of 3.5 square metres. During this contact, the region was still in shadow. It was not until months later that sunlight fell on it, so the ice still shone brightly in the Sun and was barely weathered and darkened by the space environment. Only the ice of other volatile substances such as carbon monoxide or carbon dioxide evaporated.

wComet 67P Is Full of Voids and Without Much Cohesion
This reconstruction of events is, in itself, challenging detective work, but the first direct measurement of the consistency of comet ice also provides important insights. The parameters of surface contact showed that this ancient, 4.5-billion-year-old mixture of ice and dust is extraordinarily soft - it is fluffier than the froth on a cappuccino, the foam in a bathtub or the whitecaps of waves meeting the coast.

"The mechanical tension that holds the comet ice together in this chunk of dust is just 12 pascals. That is not much more than 'nothing,'" explains Jean-Baptiste Vincent, who is studying the compressive and tensile strength of 'primitive' ice. This ice has been stored in comets for 4.5 billion years as if in a cosmic freezer, bearing witness to the earliest period of the solar system.

The investigation also allowed an estimate of the porosity of the 'rock' touched by Philae. Approximately 75 percent, three quarters of the interior, consists of voids. The 'boulders' omnipresent in the images are thus more comparable to Styrofoam rocks in a film studio fantasy landscape than to real, hard, massive rocks. At another location, a six-metre wide rock, captured in several images, even moved uphill due to the gas pressure of evaporating comet ice.

These observations confirm a result of the Rosetta orbiter mission, which gave a similar numerical value for the proportion of voids and showed that the interior of 67P/Churyumov-Gerasimenko should be homogeneous down to a block size of one metre. This leads to the conclusion that the 'boulders' on the comet's surface represent the overall state of its interior as it was formed approximately 4.5 billion years ago.

The result is not only scientifically relevant for the characterisation of comets, which alongside asteroids are the most primordial bodies in the solar system, but also supports planning of future missions to visit comets and collect samples to be returned to Earth. Such missions are currently under consideration.

12 November 2014 - The First Touchdown on a Comet
Philae gently separated from its mother spacecraft Rosetta in the afternoon (CET) of 12 November 2014 and descended at walking pace towards Comet 67P/Churyumov-Gerasimenko. As images from DLR's ROsetta Lander Imaging System (ROLIS) camera later showed, the lander, with a volume of approximately one cubic metre, hit the planned Agilkia landing site almost perfectly.

However, Philae could not anchor itself on comet 67P because the anchor harpoons provided for this purpose did not activate. Since the comet has only about a one hundred thousandth of the gravitational force at its surface compared to Earth's gravity, Philae bounced off the comet, rose to a height of one kilometre and floated over the region of Hatmehit on the smaller of the two comet half-bodies.

After more than two hours, Philae again made contact with comet 67P. The data transmitted to Rosetta during the two hours showed that the lander had come to rest after its turbulent bouncing flight, a violent collision with a cliff edge and two further contacts with the surface. A little later Philae was also able to transmit images of the landing site, christened Abydos, to Earth via Rosetta.

These images quickly showed that the lander was now not, as had been planned, in a favourable location with sufficient sunlight. For the team in the DLR control room, the work really began after the unexpected landing: they operated the lander for almost 60 hours, commanding its 10 onboard instruments and finally turning it slightly towards the Sun.

Nevertheless, the power of the primary battery ran out because too little power could be produced. The batteries could not be sufficiently charged because the Sun shone on Philae for just under 1.5 hours during each 12.4-hour comet day. In fact, the Rosetta team of several hundred people spent 22 months puzzling over where Philae actually was. 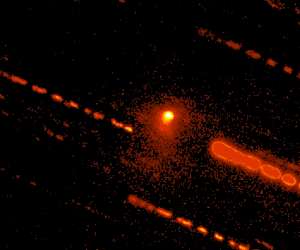 Astronomers Discover Activity on Distant Planetary Object
Flagstaff AZ (SPX) Oct 29, 2020
Centaurs are minor planets believed to have originated in the Kuiper Belt in the outer solar system. They sometimes have comet-like features such as tails and comae - clouds of dust particles and gas - even though they orbit in a region between Jupiter and Neptune where it is too cold for water to readily sublimate, or transition, directly from a solid to a gas. Only 18 active Centaurs have been discovered since 1927, and much about them is still poorly understood. Discovering activity on Centaurs ... read more