An ancient crater triplet on Mars 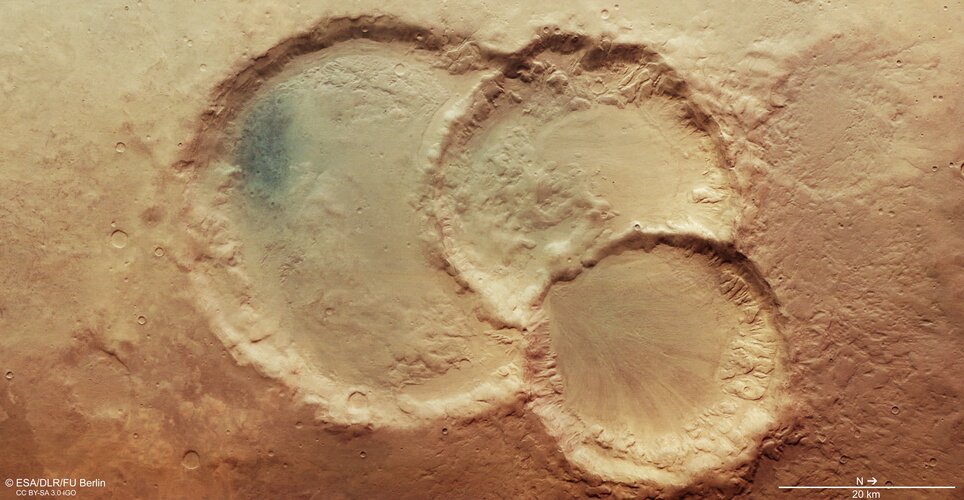 Mars is covered in intriguing scars – some of the most prominent being impact craters. A particularly unusual example is shown in this new image from ESA’s Mars Express: an ancient triplet comprising not one but three overlapping craters.

Like many of the ancient and eroded craters in Mars’ southern highlands, these three craters have flattened rims, shallow floors, and have been filled with sediment in the four billion years since their formation. There is also evidence of ice here – the smallest crater has marks that are typically created as ice and debris creep across a surface, similar to how mixed rock-and-ice glaciers or debris-covered ice glaciers move in alpine regions of Earth.

This frame may once have contained other craters, as indicated by the round patches of sunken surface to the top right and bottom left. In fact, despite the cratered nature of Noachis Terra, the environment around this triplet is surprisingly smooth for such ancient terrain. Only a handful of small surrounding craters appear to have clear, sharply defined rims and bowls, indicating that they are relatively young and have not yet begun to erode in earnest. Overall, it seems that older craters in this area have ‘melted down’ into the surface – a phenomenon that is, again, due to ice.

As ice just under the surface of Mars flows and melts over many millions of years, the soil becomes softer. This soft, ice-rich soil subsides more quickly and fills up indentations and depressions more readily, contributing to the smooth appearance of this part of Noachis Terra. This suggests that there must have been a large amount of water present on Mars, at least during the Noachian period, capable of producing a glacier-like flow of abundant ice.