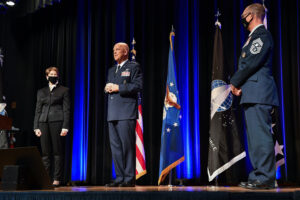 WASHINGTON — The Space Force has been the subject of snark since it was first proposed. But the naysayers are coming around, Air Force Secretary Barbara Barrett said Oct. 28.

“A year ago Space Force was an idea that was mocked,” Barrett said on a live Space Foundation webcast in a joint appearance with Gen.

John “Jay” Raymond, the chief of space operations of the U.S. Space Force.

Over the past several months, Barrett said, “there’s been a big mindset change.”

During this past year since the Space Force was created, she said, there has been a growing awareness that the nation’s economy and security depend on space and that a space service serves a valuable role.

“People hadn’t thought about it, they hadn’t thought how very dependent everyday life is on space, and how vulnerable our space capabilities could be,” Barrett said. “We’ve gone, in less than a year, from an idea that was ridiculed to a reality where, remarkably, the right and left in Congress agree it’s essential for us to be defending our capabilities in space.”

Raymond said the Space Force currently has nearly 3,000 members who have transferred from the Air Force. Thousands more will be added to the ranks in the coming years.

“We have to build on that,” Barrett said. “We have to now be able to build the capability to achieve what people now agree needs to be done.”

Acquisition is a problem

Congress has been critical of the acquisitions process the Space Force inherited from the Air Force and asked for an overhaul. The traditional way of buying satellites makes for slow and expensive programs that don’t keep up with commercial innovation, critics have said.

Barrett in May delivered to Congress a proposed “alternative acquisition system” for space but the report had to be pulled back because it had not been reviewed by the White House Office of Management and Budget.

The final report has not yet been delivered to Congress.

“I’d like to say that we got that resolved but it’s not,” said Barrett. Changing the acquisition system is “one of the harshest fights and one of the most important fights there is. You can’t build technology on a slow lethargic acquisition system. We have to move fast.”

Raymond said the proposed acquisition reforms are nearly complete. “We’re in the final stages of coordinating that,” he said.

One of the priorities is to reduce paperwork and speed up the process, he said. “We want to delegate authority down to the lowest level, shortening that gap between approval authority and those who are actually doing the work.”

In future satellite programs, he said, “we’re going to embrace digital engineering as our standard. I would encourage industry to get on board and help us do that.”

Rep. Doug Lamborn (R-Colo.), a member of the House Armed Services Committee and a co-chair of the House Space Force Caucus, said he is seeing signs that DoD and the Space Force are trying to move in a different direction with space acquisitions.

Speaking Oct. 28 on a Politico Live webcast, Lamborn said he believes the  Space Force is taking steps to “make things faster and cheaper.”

Lamborn said the Space Force is taking a page from the National Reconnaissance Office playbook. The NRO builds satellites faster than DoD because it has fewer layers of bureaucracy, he said. “The Space Force has imitated that.”

DoD is also doing better at using small satellites and other emerging technologies that “were talked about years ago” but adopted only recently,” he said. “I see Pentagon taking advantage of these trends.”