Critical aspects the campaign included handling of the propellant tanks, operating pressurant management systems, and refining the stage arming and engine startup sequences, all of which were accomplished successfully. This test campaign builds on the successes of eighteen months of extensive component, engine and stage testing.

"Every day we are humbled by our goal to raise the standard for rapid, efficient launch vehicle development," said Dan Piemont, ABL Founder and President. "Folks who know orbital launch know that integrated stage testing is the first real proof of capability. To get here in just three years with under 75 people validates the advantages of our approach."

"Simplicity is key," said Harry O'Hanley, Founder and CEO of ABL. "Our company is just over three years old. Yet, we've moved markedly faster and been more capital efficient than others because we avoid exotic, unproven architectures and manufacturing processes. Unless an innovation adds measurable value to our customer, we do not pursue it."

ABL supports a variety of customers throughout the defense, civil and commercial sectors, with over $44 million in announced contracts and a deep customer backlog. RS1 is best in class in all dimensions that launch customers value: price - as low as $9,000/kg; capability - the highest lift capacity throughout the cislunar volume; reliability - only proven technologies in the system; and cadence - existing production lines can produce a launch vehicle in under thirty days.

ABL will continue performing stage test operations at Edwards Air Force Base in the coming weeks to accumulate additional run time on the engine and stage. The launch vehicle system will undergo a series of stress tests to demonstrate performance in a variety of different flight conditions. RS1 is scheduled for an initial launch in the first quarter of 2021 from Vandenberg Air Force Base, where ABL has received a Right of Entry for LC-576E from the 30th Space Wing.

"Our team is high-performance, focused and thorough. During this campaign, we executed multiple hotfire operations every day," said O'Hanley. "We obsess over attention to detail and will apply this same tenacity to our upcoming Stage 1 operations. The first flight Stage 1 will roll out of our facility at the end of this year, destined to launch from Vandenberg Air Force Base." 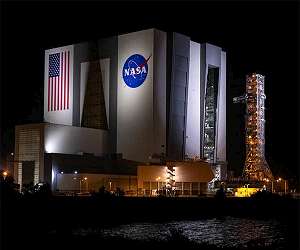 Mobile launcher arrives at Launch Pad 39B for tests, preps for Artemis I
Kennedy Space Center FL (SPX) Oct 21, 2020
NASA's mobile launcher that will carry the Space Launch System (SLS) and Orion spacecraft for Artemis I is on the road again. The Exploration Ground Systems and Jacobs teams rolled the mobile launcher, atop crawler-transporter 2, out of the Vehicle Assembly Building for its slow trek to Launch Pad 39B at Kennedy Space Center in Florida on Oct. 20. The roll began just after midnight, and the mobile launcher arrived at the top of the pad Tuesday morning. This trek to the pad will help prepare the la ... read more