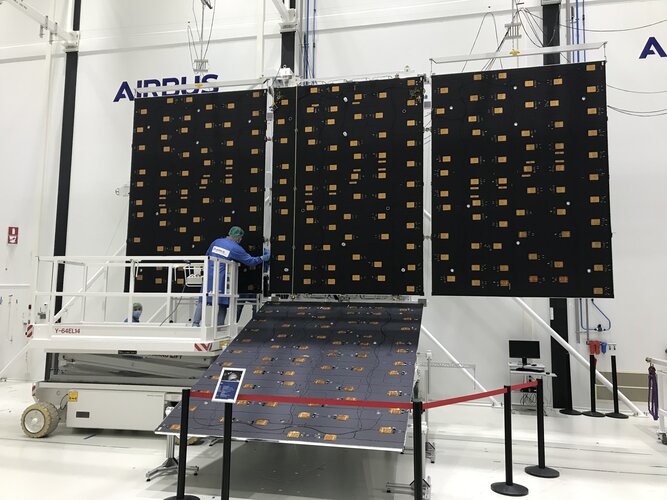 All ten solar panels for ESA’s Jupiter Icy Moons Explorer, Juice, have arrived at Airbus Defence and Space in The Netherlands ready to be turned into the spacecraft’s two solar wings. The solar panels are a key element of the mission, providing the necessary power to run the spacecraft and operate the science instruments.

Each panel measures about 2.5 m x 3.5 m, and with five on each side of the spacecraft, total an area of about 85 square metres. They have to be folded up to fit inside the launcher, and after launch, will deploy in a distinctive cross-like formation.

En route to Jupiter, Juice will make several gravity assist flybys at Earth, Venus and Mars before heading to the outer Solar System, meaning that the solar panels have to withstand a large temperature range from +110ºC to -230ºC. At Jupiter, there will be times when the spacecraft is temporarily eclipsed by the giant planet and the moons, depriving it from any sunlight, leading to a rapid cool down of the solar arrays. In addition, the spacecraft will be subjected to a harsh radiation environment. Extensive testing is carried out to ensure the spacecraft and its solar arrays can survive these tough conditions.

The next step for the solar panels is to turn them into wings and to test the deployment mechanisms. Further checks will also be made to verify that the spacecraft and its instruments can receive all of the power generated by the solar array even under the most challenging conditions.

Juice is scheduled to launch in 2022, arriving in the Jovian system in 2029. It will investigate Jupiter and three of its planet-sized moons – Ganymede, Europa and Callisto – which are thought to have oceans of liquid water beneath their icy crusts. This makes them extremely interesting to study to better understand the habitability potential of ocean worlds – in our own Solar System and in exoplanet systems beyond.

Read more about the preparation of the solar panels here.