NASA will provide live coverage of the return to Earth for agency astronaut Chris Cassidy and two Russian cosmonauts Wednesday, Oct. 21, after six months aboard the International Space Station. Complete coverage of the return will be available on NASA TV and the agency's website. Cassidy, the Expedition 63 commander, and cosmonauts Anatoly Ivanishin and Ivan Vagner of Roscosmos, will close

Cassidy, the Expedition 63 commander, and cosmonauts Anatoly Ivanishin and Ivan Vagner of Roscosmos, will close the hatch to their Soyuz MS-16 spacecraft at 4:10 p.m. EDT Wednesday. Their Soyuz will undock at 7:32 p.m. from the Poisk module's space-facing port. A parachute-assisted landing is set for 10:55 p.m. EDT (8:55 a.m. Oct. 22 Kazakhstan time) southeast of the remote town of Dzhezkazgan on the steppe of Kazakhstan.

On Tuesday, Oct. 20, Cassidy will hand over station command to newly arrived cosmonaut Sergey Ryzhikov of Roscosmos in a change of command ceremony that will be broadcast live at 4:15 p.m. on NASA TV.

After landing, the crew will return by Russian helicopters to the recovery staging city in Karaganda, Kazakhstan. From there, Cassidy will board a NASA plane for a flight back to Houston, while Ivanishin and Vagner will board a Gagarin Cosmonaut Training Center aircraft and return to their homes in Star City, Russia.

At the time of undocking, Expedition 64 will begin aboard the station, with Kate Rubins of NASA, new station commander Ryzhikov and cosmonaut Sergey Kud-Sverchkov of Roscosmos comprising a three-person station crew until the arrival of the SpaceX Crew-1 mission targeted to launch in November.

NASA astronauts Michael Hopkins, Victor Glover and Shannon Walker, and Soichi Noguchi of the Japan Aerospace Exploration Agency, will launch on the first long-duration commercial crew mission to the station.

During their expedition, Cassidy, Ivanishin, and Vagner welcomed the arrival of NASA astronauts Robert Behnken and Douglas Hurley on NASA's SpaceX Demo-2 mission, the first crewed flight of a commercial spacecraft and the first launch of humans from American soil to the space station since the final space shuttle flight in 2011. During their time aboard, Behnken joined Cassidy for four battery-replacement spacewalks outside the orbiting complex, switching aging nickel-hydrogen batteries with new lithium-ion batteries.

Cassidy worked on many research experiments during his time aboard the orbiting laboratory, including the Onco-Selectors experiment, which arrived at the space station on Northrop Grumman's 14th commercial resupply mission earlier this month.

The Onco-Selectors investigation leverages microgravity to identify targeted cancer therapies. He also contributed to research on the Droplet Formation Study, which evaluates water droplet formation and water flow, and worked with the Astrobee cube-shaped, free-flying robots being tested for use as astronaut assistants for routine duties. 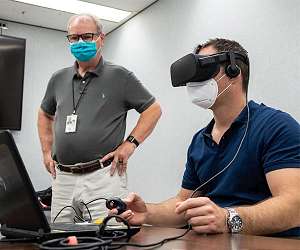 Thomas prepares for Time in space
Houston TX (ESA) Oct 14, 2020
ESA astronaut Thomas Pesquet trains for the Time experiment at NASA's Johnson Space Center in Houston, USA ahead of his Alpha mission to the International Space Station in 2021. This European experiment on the International Space Station investigates the hypothesis that time subjectively speeds up in microgravity and was first run in space in 2017. Whether an activity takes seconds or hours depends on your point of view. For astronauts living off-planet and experiencing roughly 16 sunrises a ... read more