Artemis I: demonstrating the capabilities of NASA's United Networks

On our journey forward to the Moon and on to Mars, NASA must test our technologies and capabilities to ensure astronaut safety. The Artemis I mission will be an uncrewed flight test of the Orion spacecraft that places a human-rated crew vehicle in lunar orbit for the first time since the Apollo missions of the 1960s and 70s. The mission will showcase the capabilities of both Orion and the Space

On our journey forward to the Moon and on to Mars, NASA must test our technologies and capabilities to ensure astronaut safety. The Artemis I mission will be an uncrewed flight test of the Orion spacecraft that places a human-rated crew vehicle in lunar orbit for the first time since the Apollo missions of the 1960s and 70s. The mission will showcase the capabilities of both Orion and the Space Launch System (SLS), NASA's powerful new rocket, which will launch Artemis missions from Kennedy Space Center in Florida.

The NEN's Launch Communications Segment (LCS) will provide critical links to both Orion and SLS during prelaunch and launch of Artemis I. Three ground stations along Florida's space coast comprise LCS, which was designed to meet the specific needs of the SLS launch vehicle and will grow to support other missions after Artemis I.

Specifically, the first two stations along the rocket's flight path will provide uplink and downlink communications between the rocket and mission controllers. In the final phases of ascent, the third station will downlink high rate telemetry and video from SLS while Orion connects to the satellites in NASA's Space Network.

Despite the name suggesting the network's services are limited to "near Earth," the NEN's navigation services extend to Orion's journey from low-Earth orbit to the Moon and back through ground stations in Santiago, Chile, and Hartebeesthoek, South Africa.

These NEN stations will support navigation data before and after the outbound trajectory correction burns that ensure the spacecraft stays on a path towards the Moon. The NEN will also provide navigation services during Orion's outbound powered flyby burn that occurs at the mission's closest approach to the Moon, setting the stage for final insertion into lunar orbit.

NASA's Space Network
NASA's Space Network, also based at Goddard, can provide near-continuous communications services to spacecraft through a constellation of Tracking and Data Relay Satellites (TDRS). Located about 22,000 miles above Earth, TDRS relay data from spacecraft at lower altitudes to ground antennas. The Space Network will play a critical role during launch and low-Earth orbit phases of the Artemis I mission.

Beginning at the launchpad, the Space Network will maintain a connection with Orion and the Interim Cryogenic Propulsion Stage (ICPS). ICPS provides the power to accelerate the spacecraft fast enough to overcome the pull of Earth's gravity and set in on a precise trajectory to the Moon. The Space Network will continue service until Orion and ICPS leave TDRS coverage, when NASA's Deep Space Network (DSN) takes over.

The NEN and DSN tag team navigation for Orion so that engineers can employ a technique called three-way Doppler tracking. Using this method - with two ground stations on Earth in contact with Orion simultaneously, one each from NEN and DSN - NASA can triangulate Orion's location relative to the ground stations.

At the Moon, DSN will enable insertion into distant retrograde orbit (DRO). DRO is a highly stable orbit in which Orion travels retrograde, or opposite, from the direction the Moon travels around Earth. The DSN will maintain communications with Orion while in DRO and during the burns for DRO departure, return power fly-by, return transit and the final return trajectory correction burn, with assistance from the Space Network.

The DSN will also help facilitate communications for all three of the mission's CubeSat deployment stops. The CubeSats are small satellites that will be deployed along Orion's trajectory to provide additional research opportunities for scientists and engineers. After deployment, many of the CubeSats will also communicate through the DSN.

The networks supporting Artemis receive programmatic oversight from NASA's Space Communications and Navigation (SCaN) program office. In addition to providing communications services to missions, SCaN develops the technologies and capabilities that will help propel NASA to the Moon, Mars and beyond. 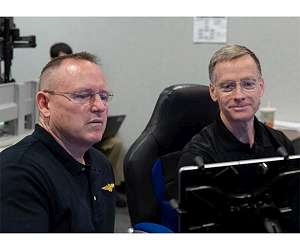