These motors will be used for six crewed Artemis missions III-VIII and are the first procured under the new Orion production contract.

The Launch Abort System is a three-motor stack consisting of an abort motor, an attitude control motor and the jettison motor all mounted atop the Orion spacecraft crew capsule, and the combined Orion and LAS sit atop of NASA's Space Launch System.

"As a former astronaut, there is nothing more important to me than ensuring crew safety to the greatest extent possible," said Charlie Precourt, vice president, propulsion systems, Northrop Grumman. "Our contribution to Orion's Launch Abort System helps to ensure it is equipped with trusted, reliable propulsion to safeguard Artemis crews."

The LAS is designed to carry the Orion spacecraft and its crew to safety if an anomaly occurs on the launch pad or during the SLS rocket's climb to orbit. The abort motor would provide thrust of about 400,000 pounds in less than two seconds to lift the crew away from the launch vehicle.

In this event, the attitude control motor would steer the Orion crew capsule away from the launch vehicle and orient the capsule for parachute deployment once the crew module is clear of all hazards.

The abort motor is manufactured at Northrop Grumman facilities in Magna, Promontory and Clearfield, Utah, and the attitude control motor is produced at the company's Elkton, Maryland, facility. Northrop Grumman previously delivered its LAS motors to Kennedy Space Center for the Artemis I mission, set to occur next year, and for Artemis II. 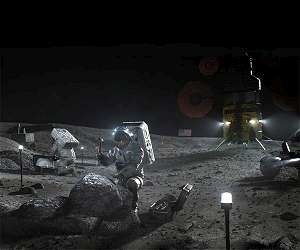 Artemis I: demonstrating the capabilities of NASA's United Networks
Greenbelt MD (SPX) Oct 09, 2020
On our journey forward to the Moon and on to Mars, NASA must test our technologies and capabilities to ensure astronaut safety. The Artemis I mission will be an uncrewed flight test of the Orion spacecraft that places a human-rated crew vehicle in lunar orbit for the first time since the Apollo missions of the 1960s and 70s. The mission will showcase the capabilities of both Orion and the Space Launch System (SLS), NASA's powerful new rocket, which will launch Artemis missions from Kennedy Space Center ... read more