A team of astronomers at the University of Hawaii at Manoa Institute for Astronomy (IfA) has produced the world's largest three-dimensional astronomical imaging catalog of stars, galaxies and quasars. The team used data from UH's Panoramic Survey Telescope and Rapid Response System or Pan-STARRS1 (PS1) on Haleakala. The PS1 3Pi survey is the world's largest deep multi-color optical survey, spann

A team of astronomers at the University of Hawaii at Manoa Institute for Astronomy (IfA) has produced the world's largest three-dimensional astronomical imaging catalog of stars, galaxies and quasars. The team used data from UH's Panoramic Survey Telescope and Rapid Response System or Pan-STARRS1 (PS1) on Haleakala. The PS1 3Pi survey is the world's largest deep multi-color optical survey, spanning three-quarters of the sky. IfA astronomers applied novel computational tools to the catalog, to decipher which of the 3 billion objects are stars, galaxies or quasars. For the galaxies, the software also derived estimates of their distances.

The resulting 3D catalog is now available as a high-level science product through the Mikulski Archive for Space Telescopes. It is approximately 300 GB in size, and science users can query the catalog through the MAST CasJobs SQL interface or download the entire collection as a computer-readable table.

Creating a 3D Catalog
Astronomers took publicly available spectroscopic measurements that provide definitive object classifications and distances and fed them to an artificial intelligence algorithm. The AI process was key in helping the team figure out how to accurately determine the same properties from various measures of the colors and sizes of the objects. This AI or machine learning approach with a "feedforward neural network" achieved an overall classification accuracy of 98.1% for galaxies, 97.8% for stars and 96.6% for quasars. Galaxy distance estimates are accurate to almost 3%.

Lead study author Robert Beck, a former cosmology postdoctoral fellow at IfA, described the process. "Utilizing a state-of-the-art optimization algorithm, we leveraged the spectroscopic training set of almost 4 million light sources to teach the neural network to predict source types and galaxy distances, while at the same time correcting for light extinction by dust in the Milky Way."

Previously, the largest map of the universe was created by the Sloan Digital Sky Survey (SDSS), which covers only one-third of the sky. The new catalog doubles the area surveyed, has greater statistics, and contains specific areas the SDSS missed.

IfA astronomer and co-author on the study, Istvan Szapudi, noted that "already, a preliminary version of this catalog, covering a much smaller area, facilitated the discovery of the largest void in the universe, the possible cause of the Cold Spot. The new, more accurate, and larger photometric redshift catalog will be the starting point for many future discoveries."

"This beautiful map of the universe provides one example of how the power of the Pan-STARRS big data set can be multiplied with artificial intelligence techniques and complementary observations," explained Pan-STARRS Director and IfA Associate Astronomer, Ken Chambers. "As Pan-STARRS collects more and more data, we will use machine learning to extract even more information about near-Earth objects, our solar system, our galaxy and our universe."


Related Links
Mikulski Archive for Space Telescopes
Stellar Chemistry, The Universe And All Within It 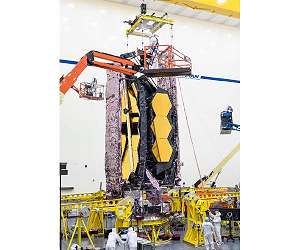 Webb Telescope completes environmental testing
Greenbelt MD (SPX) Oct 07, 2020
With the completion of its latest series of milestone tests, NASA's James Webb Space Telescope has now survived all of the harsh conditions associated with a rocket launch to space. Webb's recent tests have validated that the fully assembled observatory will endure the deafening noise, and the jarring shakes, rattles and vibrations that the observatory will experience during liftoff. Known as "acoustic" and "sine-vibration" testing, NASA has worked carefully with its international partners to matc ... read more