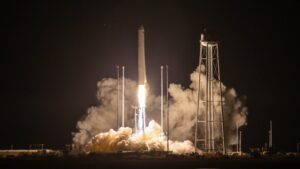 WASHINGTON — A Northrop Grumman Cygnus cargo spacecraft is on its way to the International Space Station after a successful launch on the company’s Antares rocket Oct. 2.

The Antares 230+ rocket lifted off from the Mid-Atlantic Regional Spaceport on Wallops Island, Virginia, at 9:16 p.m.

The launch was originally scheduled for Sept. 29 but delayed two days by weather. A launch attempt Oct. 1 was aborted a little more than two and a half minutes before liftoff because of a problem with software in ground systems.

The Cygnus, named S.S. Kalpana Chawla after the late NASA astronaut who died on the STS-107 shuttle mission in 2003, is carrying more than 3,500 kilograms of scientific payloads, hardware and other supplies. It will arrive at the station early Oct. 5.

This was the first Cygnus mission since the pandemic, which resulted in some changes in launch processing. “That’s made their job a little harder,” said Kurt Eberly, director of launch vehicles at Northrop Grumman, of the launch processing team during a Sept. 28 prelaunch briefing.

The company has a standard set of protocols for dealing with COVID-19, including the use of social distancing. “Nonetheless, there are certain operations, as you might expect in launch vehicle or spacecraft processing, where folks need to be within six feet of each other,” he said. The company reviewed all those cases and either found ways to implement distancing or, where that was not possible, mandated the use of personal protective equipment.

“We’ve been very successful with that,” he said. “We’ve been able to get all of the work done that we needed to get done and keep people safe while we’re doing it.

Northrop also made changes in how it handles mission operations. Frank DeMauro, vice president and general manager of tactical space at Northrop, said that some spacecraft controllers can work from home using remote networking tools. Those systems were used for the NG-13 Cygnus mission, which launched in February but remained on the station until May.

Controllers will be present in the control center for major events, including launch and berthing. “When we do have the team together in the mission operations center, we take extra precautions,” he said.

The Cygnus mission is carrying an eclectic mix of cargo. Science and technology payloads ferried to the station on the spacecraft range from an experiment to test cancer therapies to a plant habitat that will attempt to grow radishes in space.

A virtual reality camera developed by Felix and Paul Studios is on board, which will be used to provide 360-degree views of future spacewalks outside the station. A similar camera is already on board the station and is being used to create virtual reality experiments that Felix and Paul, working with Time Studios, plan to release starting at the end of the month.

Two payloads, though, attracted the most attention. One is a set of 10 bottles of an Estée Lauder skincare product that will be flown to the station for a photo shoot in the station’s cupola that the company will use as part of a social media campaign. That project is part of NASA’s efforts to encourage commercial use of the station, with Estée Lauder paying NASA $128,000.

The other payload that received widespread public attention is the Universal Waste Management System, a $23 million next-generation space toilet that will be installed on the station. Astronauts will test the toilet, which NASA plans to use on the Orion spacecraft.

At a Sept. 24 NASA briefing, Melissa McKinley, NASA Advanced Exploration Systems Logistics Reduction project manager, said the new toilet is 65% smaller and 40% lighter than the toilet currently used on the ISS. “The big key to the exploration piece of the design is looking to optimize mass, volume and power usage,” she said.

NASA also worked to refine the design to make it more comfortable to use, particularly for female astronauts. “We’re really excited about this new toilet. I don’t think we’ve developed a new toilet in a couple decades,” said Jim Fuller of Collins Aerospace, which worked with NASA on the toilet. “When the astronauts have to go, we want to allow them to boldly go.”