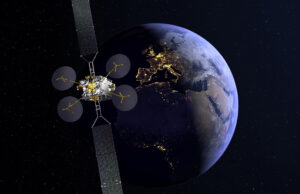 The European Space Agency has awarded study contracts to Airbus and Eutelsat consortia to identify what solutions and “disruptive technologies” the agency should focus on, with the goal of helping European and Canadian satellite communications companies succeed.

ESA said the teams will study the pros and cons of large satellites in geostationary orbit, smaller satellites in low Earth orbit, satellite ground systems and other topics. The consortia are required to submit their reports to ESA by the end of February. [ESA]

The CEO of Leonardo, Alessandro Profumo, will lead the Aerospace and Defence Industries Association of Europe (ASD) for a two-year term, Leonardo announced Sept. 21. ASD represents more than 3,000 small to medium-sized businesses across Europe, as well as many of the continent’s largest companies involved in space, defense, aviation and security. Profumo said he will “work to ensure that the potential of the [aerospace, defense and security] sector is recognised, deployed and supported with effective tools and investments, promoting a continuous and transparent dialogue with European stakeholders.” ASD has a division called Eurospace that focuses on the space sector. [Leonardo]

Written by SpaceNews correspondent Debra Werner and sent to subscribers each Wednesday, it will highlight the intersection of industry and innovation.

If you’re already subscribed to First Up Satcom, you will automatically get SN Commercial Drive. If you are reading a forwarded copy of this newsletter, you can go to https://spacenews.com/sn-commercial-drive-newsletter/ for a free subscription.

Amazon, OneWeb, SES mPower, SpaceX, and Telesat could generate $68 billion in revenue over the next decade, though some constellations will be more successful than others, according to NSR. With constellations launching through 2024, “all eyes will be on the performance of Broadband and Trunking applications, along with utilizing software to optimize network and price and avoid interference as each player tries to maximize revenue,” NSR said. The influence of megaconstellations could push established geostationary satellite operators to consolidate in order to compete more effectively, according to the research firm. [NSR]

Microsoft unveiled a service Tuesday to connect satellites to its cloud computing infrastructure. Azure Orbital offers a “ground station as a service,” allowing customers to directly connect with satellites and downlink and process data from them. Microsoft is partnering with several companies for the service, including KSAT, whose network of more than 200 satellite antennas will be part of Azure Orbital. The new service competes directly with Amazon, whose Amazon Web Services previously announced a similar service to support space and launch operations. [SpaceNews]

African broadcast company Azam TV has renewed and expanded a contract with Eutelsat for capacity over Tanzania, Uganda, Malawi, Kenya and Rwanda. Azam TV migrated from the seven-year-old Eutelsat-7B to the one-year-old Eutelsat 7C satellite, where it acquired additional capacity under a multiyear contract. The pay-TV operator will use the capacity to distribute a mix of 120 standard and high-definition channels. [Eutelsat]

L3Harris has won a Space Force contract to upgrade and expand a network of space tracking telescopes. The $119 million contract covers work on the Ground-based Electro-Optical Deep Space Surveillance System (GEODSS) that tracks objects in geostationary orbits. The work funds upgrades to existing GEODSS sensors and the design of new ground-based optical sensors at European and Pacific sites. The contract will be worth $218 million if all options are exercised to build two new sites in Spain and Australia. [SpaceNews]